It has been confirmed that a commander of the Joint Task Force (JTF), Major J.F London was killed by bandits. 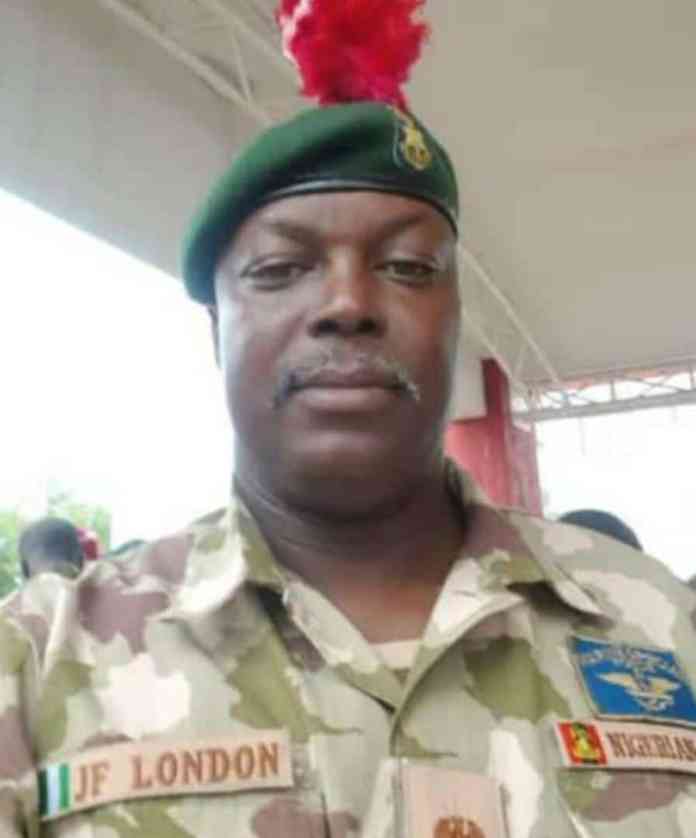 Joint Task Force (JTF), Major J.F London
More details have emerged concerning the death of a senior military officer and a top commander of the Joint Task Force (JTF), Major J.F London.
According to Sahara Reporters, gunmen suspected to be bandits killed the senior army officer, Major J.F. London, in Zamfara State.
A military source confirmed to SaharaReporters that London was killed during an ambush set up for Nigerian soldiers at Janbako town in the Maradun Local Government Area of the state on Sunday.
The source said the attackers came in a Hilux vehicle and motorcycles given to repentant bandits by Governor Bello Matawalle.
Two other soldiers were also injured during the attack.
The soldiers were said to be on their way to restore peace at Janboko after bandits invaded the community.
SaharaReporters had exposed how about 15 brand new Hilux vehicles were given to leaders of different 'repentant' banditry groups by the governor.
The governor also approved millions of naira to be given to the 'repentant' bandits as compensation.
“A senior military officer and a top commander of the Joint Task Force (JTF) here in Zamfara State, J.F. London, was the one killed by bandits in Janboko on Sunday,” the source said.
“The gunmen came in one of those Hilux vehicles given to leaders of different repentant banditry groups in Zamfara State by Governor Bello Muhammad Matawalle.
“They were later resisted by the local vigilantes, so they fled and left behind the Hilux vehicle and the motorcycles they came with.”
Zamfara, like many other states across the North, has witnessed sporadic attacks by bandits and kidnappers that have claimed the lives of many.
The state government in 2019 entered into a peace agreement with the gunmen.
But despite the accord, communities in the state are still being attacked and residents kidnapped and/or killed.
Zamfara, like other North-West states, has in the last 10 years faced devastating attacks from armed bandits.
A committee set up to investigate the menace of armed banditry in the region, headed by Mohammed Abubakar, a former Inspector General of Police, reported that in Zamfara State between June 2011 and May 2019, 4,983 women were widowed; 25,050 children were orphaned; and more than 190,000 people were displaced as a result of armed banditry.
Last year, Governor Aminu Masari, Matawalle's counterpart in Katsina State, said his administration had to pull out of the peace deal it had with bandits that had been terrorising residents of the state.
Masari said despite the peace deal, the gunmen continued to carry out attacks with their accomplices from Zamfara, Kaduna and Niger Republic, leading to “indiscriminate killings” and kidnappings in the state.
He said, “The armed bandits have betrayed our trust in them, following a peace agreement earlier negotiated with them, in our quest to find a lasting peace in the state,” he was quoted as saying.
"We chose dialogue for peaceful coexistence in the state and we have done our best; yet, the attacks continue.
“As a result of the peace agreement, the government banned vigilance groups and identified cattle routes and facilitated free movements of bandits to convey their livestock to the markets.”
Top Stories