The clash between IPOB's security outfit, the Easter Security Network has been justified by the group. 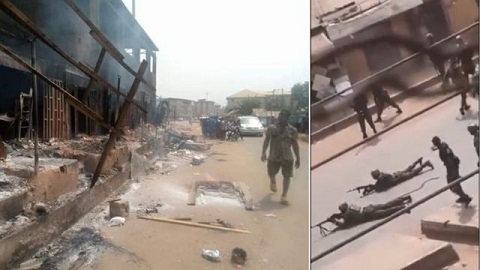 IPOB and army clash in Imo
The Indigenous People of Biafra (IPOB) has broken its silence after its security outfit, the Eastern Security Network got involved in a bloody clash with men of the Nigerian army.
The sad incident took place on Monday January 25 in Orlu, Imo state.
IPOB’s spokesman Emma Powerful in a statement released on Tuesday January 26, accused Governor Hope Uzodimma of Imo state of working with the Army to attack and flush out ESN officers from the bushes where they are operating from.
While the Nigerian Army said only one person died in the crossfire that ensued, IPOB insisted that five people were killed and several others were injured in the skirmish between ESN and soldiers drawn from the 34 Artillery Brigade in Obinze.
“ESN personnel are in the bush and forest chasing…terrorists and herdsmen who are over there terrorising our members and sisters in their respective farms, not Nigeria security agencies but they are looking for ESN’s trouble.
“Since the formation and inauguration of ESN by our great leader, Mazi Nnamdi Kanu, on December 12, 2020, they have been inside the bushes and forests; their job is to protect farmers from invaders who made pronouncements that all lands in Nigeria belong to them.
“Every time, Nigerian Army and the police would come and look for their trouble in the bush."
Top Stories