He stormed the town with his supporters last Friday to effect the eviction order blaming them for series of kidnapping, rape and killings in the community. 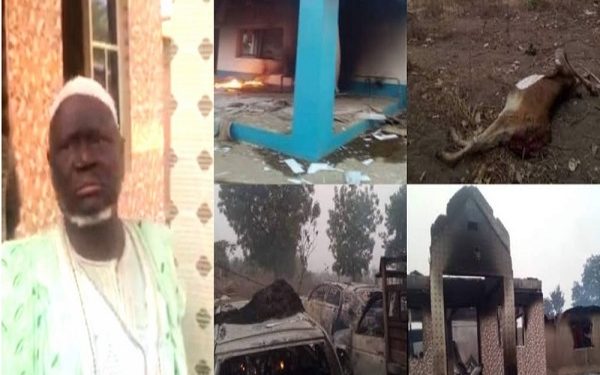 Alhaji Salihu AbdulKadir, the Serikin Fulani of Igangan Ibarapa local government area of Oyo State, has opened up about his losses.

Igboho had issued a seven-day ultimatum to herders to leave Igangan.

He stormed the town with his supporters last Friday to effect the eviction order blaming them for series of kidnapping, rape and killings in the community.

AbdulKadir said seven Fulanis and properties worth over N500m were lost to the invasion.

He also denied complicity in some of the alleged kidnapping incidents in the area, especially the killing of an Havard-trained indigene, Dr Fatai Aborode, who was gruesomely murdered by suspected herdsmen.

Addressing reporters in Ilorin, Kwara state, he denied allegations against him were concocted by Igboho with the sole purpose of getting the Fulani out of Igangan and other parts of Yorubaland.

“I and my family have been living in Igangan for over 50 years without any challenges from anybody either in Igangan or any other places,” AbdulKadir explained.

He called on Emirs and other traditional rulers in the 19 northern states to come to the rescue of the Fulani residents in the South-West.

He equally called on the Federal Government to probe the burning of his house, vehicles and the killing of seven of his men in Igangan by alleged agents of Sunday Igboho.

AbdulKadir added: ”When a Fulani boy named Omomogeto was reported to me that he raped someone, I told the vigilante to arrest the Fulani boy.

“When he was arrested, I investigated the matter and discovered that he committed the offence, I handed him over to the family of the victim.

“Also, a young lady was raped by an indigene of Igangan last year to the extent that the young lady died in Igangan, nothing was done to the man who raped the young lady.

“There was no case of farm destruction reported to me that I will not send people to go and look at the farm that was destroyed. If discovered that it’s true, I will order the Fulani to pay money to the farmers; i.e the Agoro family in Igangan and many more. I have a record where I’m recording the issues affecting the farmers.”

On the alleged killing of one Aborode, he said: “I don’t know anything about it. Where Dr Aborode was killed is very far to my village. It’s about two- hour drive to my village; you will pass through Igangan town before you get to where I am.

“Finally, I want the federal government to investigate this matter and anyone found guilty should face the law. My houses, 12 vehicles belonging to myself, my children and some visitors were burnt and seven of my people were killed. The corpses of two were yet to be found and some of my animals were carted away.”