IPOB leader, Nnamdi Kanu has lashed out at Aisha Yesufu for condemning attack by IPOB security network against herdsmen. 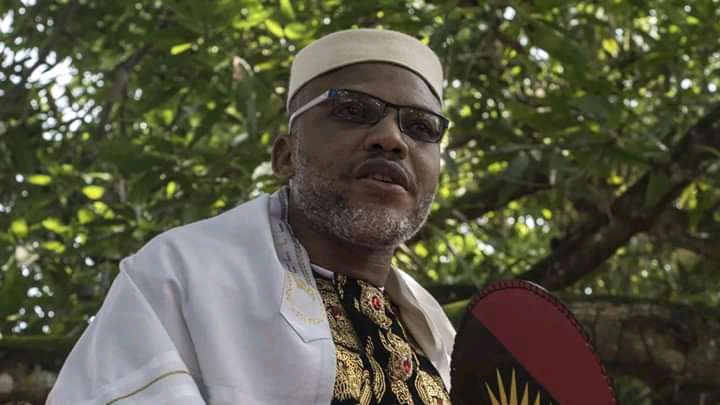 Nnamdi Kanu
The leader of the Indigenous People of Biafra, Nnamdi Kanu has lambasted Aisha Yesufu after she expressed disappointment at the manner IPOB's security arm, the Eastern Security Network attacked herdsmen in Abia state.
The human rights activist and co-convener of #BringBackOurGirls Movement had said ESN driving Fulani herdsmen out of Isiukwuato in Abia State was terribly wrong
Kanu, on Sunday, had shared on his Facebook page how the ESN operatives invaded the camp of some herdsmen in Isiukwuato, Abia State, chasing them, burning their houses and killing their cows.
The IPOB leader also quoted alongside the footage, “Video of men at work last night across all the towns and villages of the old Bende Division, especially Isiukwuato.”
“ESN has commenced the combing of parts of Isiukwuato forests last night and engagement with the enemy is ongoing and will continue until they no longer present a threat to our communities along that axis…” he added, sternly cautioning the herders.
In response to Kanu’s video, Yesufu, on her Twitter page, labelled the occurrence as highly unacceptable and adding that that no one has control of violence.
“This is absolutely not acceptable. We cannot have security outfits taking laws into their own hands & maiming, killing & destroying properties. This is not acceptable. We must always remember no one has a monopoly of violence and intolerance and we can all be mad. Let the law guide us!” She tweeted.
Kanu, in a statement issued on Monday, through the IPOB media and publicity secretary, Emma Powerful, said, “If you are one of the #Zoo animals suffering from an advanced form of Stockholm Syndrome, may it kill you there. We in the East are not, have never been and can never be slaves to any bunch of retards. Ask the British.
“We won’t tolerate any iota of killer Fulani herdsmen menace in the East. You may be comfortable with your wretched Fulanised existence where you are but we won’t live with that rubbish in the land of the Rising Sun. Where were you when our people were being slaughtered, raped and kidnapped in Isiukwuato? Talkative lunatics like Aisha Yusuf.”
In his statement, he also noted that ESN would start the implementation of its own anti-open grazing law in the South-East, as earlier said last week.
“In less than two weeks, #ESN will commence the full enforcement of Nigeria’s Anti-Grazing Law in the East. Turn into a cow then and see what shall become of you. You are about to understand how determined we are. You have the temerity to talk about the monopoly of violence?
“All these years Fulani murderers in your #Zoo army and police uniform have been killing Biafrans, what did you fools say? Why did you not open your stinking mouth to condemn your Alimajiri Hisbah Police? Did you not see them publicly destroying beverages worth billions of naira belonging to Biafrans, in full view of the public? Cowards and hypocrites!
“The era of Biafrans crying and lamenting the EU and UN has come and gone. The Dragon Flag has been raised! If you don’t know what it means, go and ask. By the time what is about to happen is concluded, you will see Somalia as paradise on earth.
“Yap all you like, hire every inch column of #Zoo newspaper as you like, there is no going back. You #Zoo animals are about to witness the type of madness you never knew existed. Aisha Yusuf, be very careful.”
Top Stories