The Minister of Education, Adamu Adamu has been fingered in a contract scam by the Economic and Financial Crimes Commission. 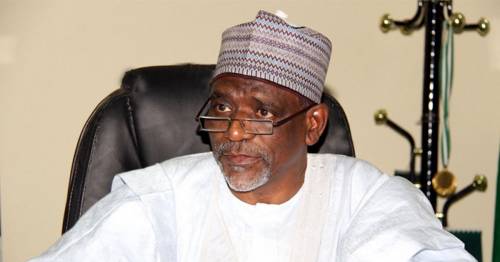 Minister of Education, Adamu Adamu
The Minister of Education, Adamu Adamu is under investigation for alleged contract scam.
According to the Economic and Financial Crimes Commission, Adamu is being investigated alongside some ministry officials over a contract scam which borders on the construction of perimeter fencing at the Federal University, Gusau, Zamfara State.
SaharaReporters gathered that the EFCC has also detained the Federal University, Gusau, Zamfara State Vice-Chancellor, Prof Magaji Garba, who had been indicted in the contract scam.
He is being further investigated.
It was learnt that the VC is presently at the holding cell of the EFCC in Abuja.
He allegedly connived with some officials of the education ministry to execute the failed perimeter fencing contract – the cost of which stands at N3 billion.
Two contractors were said to have paid the VC some kickbacks to “appreciate him” in anticipation of the award of the contract to them. The first contractor, identified as Alhaji Shehu Sambo,  paid N260 million while the second paid N108 million directly to the VC.
In the end, the two contractors did not get the said contract, and they both had since petitioned the EFCC.
Sources within the ministry believed that the VC did not spend the money alone, but has some top collaborators in the ministry.
According to EFCC correspondence to the education ministry obtained by 247ureports.com, the anti-graft agency confirmed the VC’s arrest for the contract fraud.
In the first letter signed by the EFCC Acting Director of Operations, Umar Hadejia, titled, “Investigation activities: Construction of perimeter fence Phase 1 of Federal University Gusau”, and dated January 6, 2021, the agency addressed the education minister directly.
The EFCC said, “The commission is investigating a case of contract scam in which the need for clarification from your office has become imperative. In furtherance to the investigation, you are kindly requested to furnish us with the following information; confirm if a contact was awarded and approved for the construction of a perimeter fence at Federal University, Gusau, Zamfara State.
“Two, if the above is affirmative, confirm the status of the projects, details of payments and outstanding if any.”
In the second letter, titled, “Arrest of Vice-Chancellor, Federal University Gusau, Zamfara State,” signed by the same EFCC official, the agency wrote, “In the course of investigation, an undoubtedly prima facie case of obtaining money by false pretences and contract scam was established against the aforementioned. Accordingly, he has been detained and further development will be communicated to your office.”
Top Stories