Nigeria's President Muhammadu Buhari has been slammed for not representing the interest of all Nigerians. 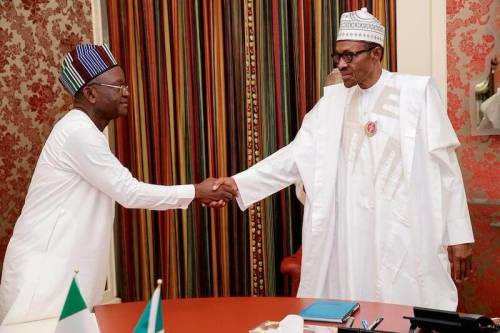 Governor Ortom and President Muhammadu Buhari
President Muhammadu Buhari has been slammed for putting the interest of Fulani people above that of other Nigerians.
Benue State Governor, Samuel Ortom noted this while calling on Buhari to change.
Speaking on Wednesday, Ortom criticized Buhari over his failure to condemn and caution the Fulani herdsmen terrorising Nigerians.
The governor said from Buhari's disposition, he has appeared as the President of only the Fulani people and not the President of Nigeria.
The governor said Buhari was not keeping to his promise he made to Nigerians during his inauguration in 2015 that he would be the President of everybody and nobody.
Ortom stated this at a press conference in Makurdi on Wednesday after his recovery from COVID-19, saying no Nigerian is a second-class citizen or slave to the Fulani people.
At the conference monitored by Punch, Ortom lambasted the Presidency for calling for the arrest of popular Yoruba rights activist, Sunday Adeyemo, well known as Sunday Igboho, who issued a quit notice to herdsmen accused of abductions, rape, destruction of farms, and others in the Ibarapa area of Oyo and enforced same.
The governor said the Presidency kept mum when herdsmen killed and maimed Nigerians but was swift to order the arrest of persons who resisted the criminal activities of the killer herdsmen.
He said, “Why is the Federal Government being silent about these Fulani herdsmen? When will Federal Government come out and criticise and arrest herdsmen carrying AK-47? When are they going to do that? Are we second(-class) citizens in this country? Why (is) the Fulani man superior to a Tiv man? I am not their slave, a Benue man is not a slave to any Fulani man in this country.
“We stand for justice, equity and fairness. Whatever is happening to a Fulani man should also happen to a Tiv man. That was why I called the Federal Government to licence me and many others to have guns, to have AK-47 too. Because if I have my AK-47 and a Fulani man is coming there, he knows that I have and he has, then we can fight each other.
“But you can’t disarm me and arm a Fulani man. This is not right, the Federal Government is bias, it is unfair. The failure in security is caused by the Federal Government. Mr President, in case you are listening to me, I want you to know that your people, Nigerians, you promised Nigerians that you will be fair to all.
“You said that you will be for everybody and for nobody, and now it will appear that you are for Fulani people because nothing is coming from you to give the people confidence that you are their President.
“You are the President of the Federal Republic of Nigeria, you are not the President of Fulani. You are the President of everybody and I owe you a duty as a stakeholder in this nation to let you know that what is going on is wrong and this has the potential of dividing this country which will not be in the interest of anyone –some of us believe in the unity of this country.”
Continuing, the governor said, “Mr President, if some people are deceiving you that all is well, it is not well with us in Benue State and what I can hear from other states, it is not well with Nigeria today, you must act fast before it is late.”
Top Stories