Oyo State Governor, Seyi Makinde has reportedly doled out billions to purchase cars for his loyalists. 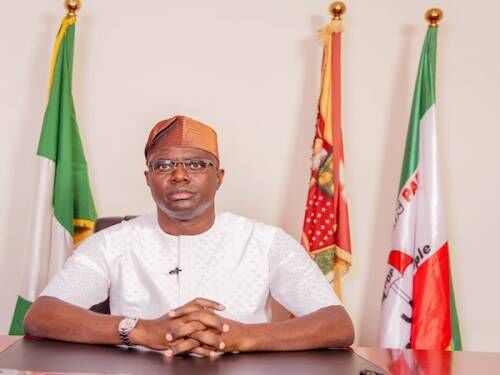 Oyo State Governor, Seyi Makinde
Loyalists of Oyo State Governor, Seyi Makinde are smiling home after he spent billions to buy cars for them.
According to Sahara Reporters, the money was spent on Peoples Democratic Party (PDP) members and state House of Assembly loyalists.
A source close to the government informed SaharaReporters that Makinde purchased a 2020 Toyota Prado SUV worth N65 million for Alhaja Abosede Adedibu, wife of the late political leader in Ibadan, Chief Lamidi Adedibu.
The source further revealed that a 2020 model of SUV worth N45 million, was also given to a Fuji musician in Ibadan, Taye Currency, while a 2020 Toyota LX 570 SUV was bought for Mutiat Ladoja, wife of a former governor of the state, Rasheed Adewolu Ladoja.
Also, each of the state executive committee of the party also got over N2 million worth of car gift from the governor as reward for their support for him.
Governor Makinde had in December 2019 obtained N2 billion loan to purchase cars for 32 members of Oyo State House of Assembly.
The loan made a former prosecutor with the Special Presidential Panel on Recovery of Public Property, Tosin Ojaomo, to petition the Economic and Financial Crimes Commission over fraud allegations in the purchase of about N1.03bn worth of official cars for members of the Oyo State House of Asembly.
According to the petition dated December 7, 2020, the contract, which was executed by a firm (name withheld), was for the procurement of 33 Toyota Camry cars for the House of Assembly members and the Clerk at N759m as well as two Toyota Hilux pick-up vans for the Speaker, Adebo Ogundoyin, at N40m.
Two Toyota Land Cruiser SUVs valued at N106m were also purchased for the Deputy Speaker, Abiodun Fadeyi, and as Ogundoyin’s back-up vehicles, the petition stated.
The PUNCH had earlier reported that Ojaomo, in his petition, alleged that the contract was for the supply of new 2019 vehicle models but noted that refurbished models were supplied instead.
The lawyer claimed that the contract was fraudulently arranged to favour the contractor instead of Elizade Motors and Mandilas Motors which also tendered quotations.
He added that the alleged scam was discovered when some of the 33 cars supplied by the contractor started having mechanical and electrical problems few days after delivery to the lawmakers.
Ojaomo, therefore, asked the EFCC to recover the full contract sum from the firm.
The petition read in part, “My petition stemmed from recent findings that the sum of N1,031,380,000 earmarked by the Oyo State Assembly for the purchase of vehicles for honourable members of the House was diverted by the Speaker and Deputy Speaker with the connivance of a company contracted to handle the purchase and supply of cars to the House members.
“The contract was awarded for the supply of brand new Toyota Camry 2019 models but instead of supplying new cars, he went ahead to supply refurbished vehicles and cleaned up the mileage in order to make them look like new ones.”
When asked about the probe, the EFCC spokesman, Wilson Uwujaren, said, “Petitions go through a vetting process and it is premature to comment further at this stage.”
The Chairman, House Committee on Information, Kazeem Olayanju, described the allegations as false.
“I was not able to reach the Speaker to hear from him but from my little findings, they are false allegations,” he stated.
A strong member of the party in Egbeda Local Government Area of the state, who spoke on condition of anonymity, demanded explanation over Makinde's car gifts as reward for loyalty.
He said many PDP members are not happy with the style of leadership of the party in the recent time, saying, "We have done our best. Our comon members are not really getting anything from the party while some are being rewarded with car gifts."
Another member who confirmed the story to SaharaReporters said though he didn't know the price of those cars, they were well deserved gifts for the beneficiaries.
Top Stories