He also made attempts to hide his face from the press camera as he continued to shout and scream at the journalists who were there to cover the incident. 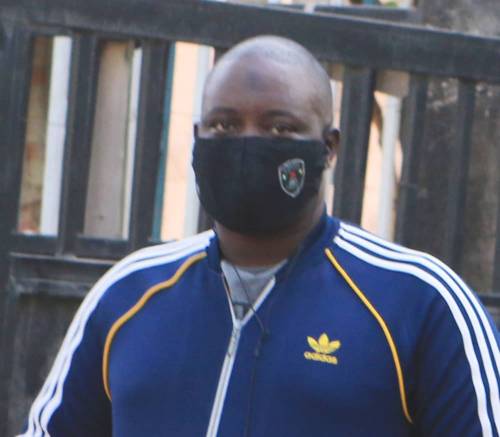 It was serious that took place place on the premises of the Magistrates’ Court in Wuse Zone 2, Abuja recently.

The drama ensued after a policeman who was accused of torturing former presidential candidate of the African Action Congress, Omoyele Sowore, and four others arrested on New Year’s Eve, harassed and threatened to beat up the activist in court.

The officer, DSP Sulayman Abdukabir, was among the large number of armed policemen drafted to the court where they were standing trial for trumped-up charges bordering on criminal conspiracy, unlawful assembly and inciting public disturbance.

Sowore, who was about to address some of his supporters outside the court, was able to identify the officer who had tortured him and broken his nose when they were arrested on the eve of the New Year.

Abdukabir in the process harassed and threatened the activist and his supporters, leading to an altercation between Sowore and the police.

He also made attempts to hide his face from the press camera as he continued to shout and scream at the journalists who were there to cover the incident.

It took the intervention of other police officers who cautioned the power-drunk policeman and warned him not to continue with the show of shame.