The All Progressives Congress has ignored complaints by two of its leaders to go ahead with the registration of members. 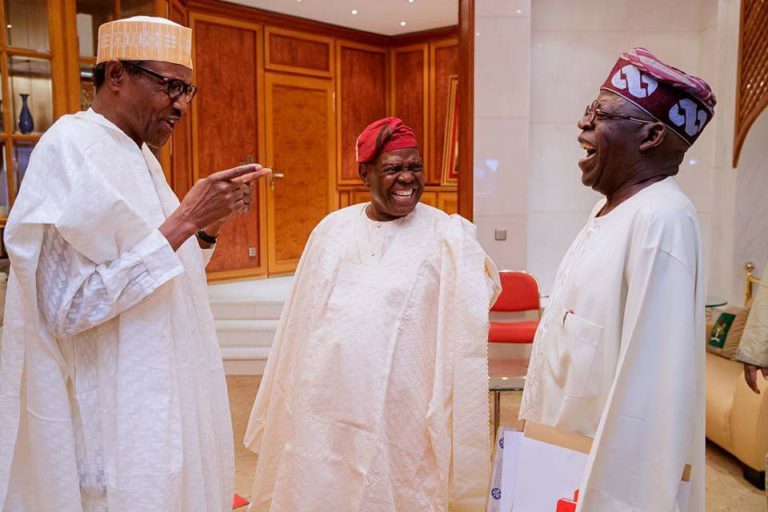 Buhari, Akande and Tinubu
Complaints by national leader of the All Progressives Congress, Bola Tinubu and ex-osun governor Bisi Akande have been ignored by the party as registration of members continues.
According to TheIndependent, Tinubu and Akande had objected to the ongoing registration of party members.
Akande had on Thursday criticised the ongoing mem­bership registration and re­validation exercise, describ­ing it as wasteful. He also hit hard at the par­ty’s National Caretaker Com­mittee headed by Yobe State governor, Mai Bala Buni, saying the committee was an abnormality.
The former governor of Osun State, who spoke to the party delegation led by Senator Lawan Shuiabu, reg­istered him at his Ward 04, Unit 012, Isedo1, Ila-Orangun, Osun State. He said the caretaker committee must desist from the temptation to want to sit tight in office.
He had said: “In normal circumstances, a Caretaker Executive Committee for a po­litical party is an abnormality. If not carefully controlled and expeditiously managed, most aberrant authorities end up in contempt and disgrace. For this reason, I want to urge the present APC Care­taker Executive Committee to resist all temptations of sit-tight syndromes that usu­ally characterise most hand-picked authorities in most underdeveloped countries of the world.”
He also criticised the fresh registration, saying it was a wasteful exercise when the party had a well-computer­ized register that could be updated to take advantage of new technology if the need arose.
Akande also questioned the wisdom in compiling a fresh register when the last one was not up to a decade, arguing that even the nation­al census was not conducted that way.
Many who said Akande spoke Tinubu’s mind were proven right at the weekend when he (Tinubu), while ad­dressing journalists at his Ikoyi residence in Lagos, said he endorsed Akande’s position because he hadn’t heard a situation whereby the party’s register submitted to the Independent National Electoral Commission (INEC) at the time of the APC regis­tration had been invalidated.
Speaking with TheIndependent, a member of the Caretaker Committee said while the points made by Tinubu and Akande were well noted, nothing was going to stop the registration process.
He also said while the com­mittee won’t join issues with the two party leaders, they would have appreciated it if both of them had written to the party secretariat to reg­ister their objections rather than addressing the media on it.
“Yes, their complaints are noted but I can’t tell you if it is genuine or not. To me, it is not criticism, it is just advice which the party will look into, maybe after the whole exer­cise and deliberate on the next step. That will not in any way stop the registration and val­idation exercise.
“President Buhari, who is the number one leader in the party, has registered. Even Asiwaju, who is our national leader and Papa (Akande) also registered. It would have been a dif­ferent thing if they had said they were not going to register based on their observations. So, nothing is going to stop the exercise,” he said.
Also speaking, Director General of the Progres­sive Governors’ Forum, PGF, Salihu Lukman, has advised against handing over the membership regis­ter of the APC to any chief­tain of the party, warning of grave undemocratic consequences.
Lukman, in a statement on Sunday, in Abuja, said it must be emphasised that in all the debates leading to the current membership registration/ revalidation exercise of the APC, no one had disputed the current membership register of the APC.
“The emphasis has been that it should be updated to delete names of members who have left the party and register new members. In addition, the register should be domiciled in the National Secretariat of the party and not with individual leaders of the party.
“Having the membership register in the custody of in­dividual leaders, especially when such leaders are being speculated to have ambitions for electoral contests, is prob­lematic".
Top Stories