A pastor who accused Apostle Johnson Suleman of sleeping with his wife has reacted after he apologized. 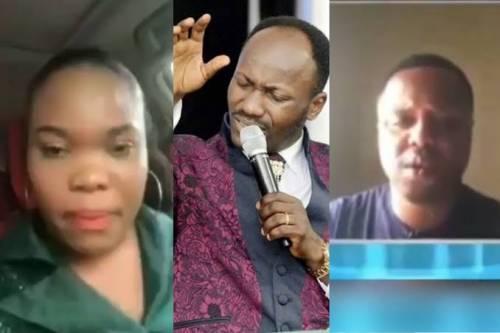 Suleman tendered the apology over the weekend
Apostle Johnson Suleman has been called a liar and manipulator by his former pastor, Mike Davids over a recent apology he made.
Davids who accused Suleman of sleeping with his wife, asked people not to believe the Omega Fire Ministries founder.
Recall that Mike Davids had released an audio in which Suleman was threatening and promising to make him disappear.
The General Overseer of the church later apologized.
Davids is a former pastor of the church is husband of Faith Edeko, who currently heads an Abuja branch of the church.
Earlier on Saturday, Davids released an audio file claiming it was his conversation with Suleman. In the audio file, Suleman was heard saying he would make someone disappear.
But reacting to the development in a video, Suleman admitted that it was his voice in the audio clip.
Suleman, however, said the audio clip was from a conversation he had with a lady who he was telling to stop calling him three years ago, and not from a phone conversation with Davids.
He claimed he relieved Davids of his duties as a pastor in Omega Fire Ministries because he has a 'black heart', while also accusing him of always planning evil against other pastors.
But reacting in a video posted on his Instagram handle, Davids said the audio he released was the real audio while Suleman's was the doctored one.
He said, "My name is Mike Davids, my attention has been drawn to a video made by Apostle Johnson Suleman 24 hours after my audio was released and that video that he made addresses two major things principally which I will respond to now: the first one is that he claims I was never the one he was addressing in that audio, that the conversation was made three years ago and secondly, he claims he sent me out of Omega Fire Miistries for blackmailing other pastors.
"First of all, the audio I released is the original audio and Apostle Suleman knows that the audio I released is the real one, the one he released is doctored, fake and manipulated. Don't forget that I was part of that system for 16 years and all of these manipulations are part of the system.
"All the videos you are releasing is a lie from the pit of hell, that it was some persons you were addressing and all."
Davids countered the claims of the general overseer, stating that he was not sent out of the church but left on his own.
He claimed there was no way his presence in the church guaranteed him of going to heaven.
He said, "You said you sent me out of Omega Fire Ministries for blackmailing pastors, I was never in that habit. I want Nigerians to know that it is a lie. I left that ministry because I became convinced that weakness should never be seen as wickedness and it became very obvious to me that my eternal destiny was not in view following that kind of leader that I was following and that if I continued in the ministry, I knew where I was going to end.
"I left of my own will, you were never the one that sent me out of that ministry, I was tired of your ungodliness as a leader and that is one of the major reasons I left. Forget the manipulations and cheap lies you are trying to buy Nigerians with, they already know the truth of the issue."
Top Stories