A fashion designer has been arrested by police in Lagos and later paraded as an armed robber. 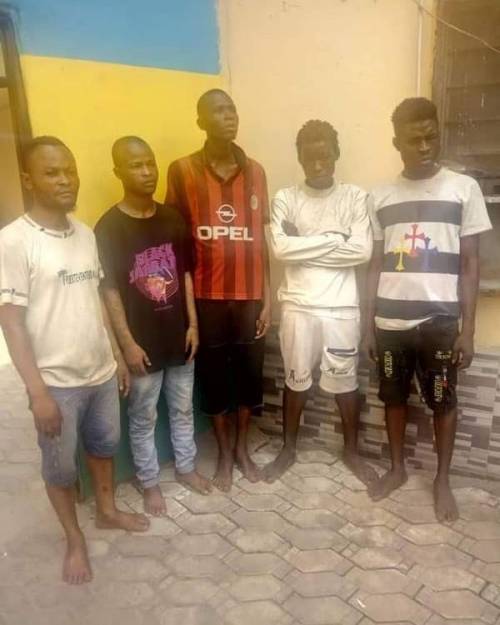 Sunshine paraded as an armed robber
The Lagos state police command has been accused of parading a fashion designer arrested for violating COVID-19 protocol as an armed robber.
Friends of the fashion designer identified as Sunshine in the Ikorodu area of Lagos debunked claims that he is a traffic robber after he was paraded as one.
According to them, Sunshine was arrested by some policemen and paraded as a traffic robber because his family and friends failed to pay N200,000 to bail him.
The Punch had reported on Thursday that five suspected traffic robbers were arrested by men of the Lagos State Police Command during a raid on a criminal hideout in the Ikorodu area of Lagos.
A picture attached to the post included that of Sunshine but his friends have kicked against this.
For instance, one of the workers at his company, Jewel Fashion Design, Oyedeji Yetunde, said her boss is not a robber.
In her post on Facebook, she claimed he was arrested for not wearing a face mask and that when they went to the task force office in Oshodi to bail him, the policemen asked for N200,000 for his bail but they couldn't afford the huge sum.
She wrote, "I was surprised with this, my boss went to make delivery on Thursday night only to be apprehended by some guys, asking him about his face mask and he said he had forgotten it (sic). They pounced on him with heavy beatings at the garage.
"The policemen called with his number and we told them he is a fashion designer well known around Munirat Aleje, and we were asked to come to the task office at Oshodi.
"They themselves later told us he was innocent but because he didn't use his face mask, they asked for N200,000 from us for his bail and we said we didn't have such, only to see this today about what they posted about him. Is this fair?"
One Quddus Gbagba also described the fashion designer as a man of good character.
Top Stories