The beggars were seen in their hundreds without facemasks, waiting for the usual handouts given to them whenever the governor visited his hometown. 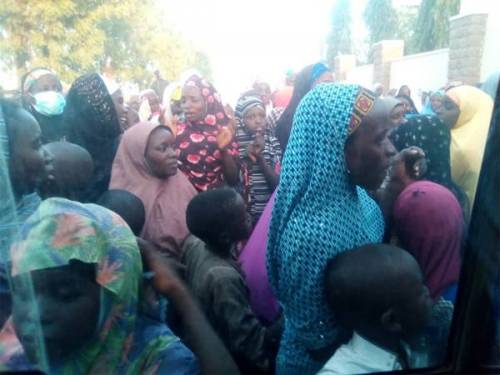 In what will come across as a really startling development, some hundreds of beggars have besieged the residence of Jigawa State Governor, Mohammed Abubakar, in his hometown in Babura.

According to Vanguard, Badaru was in Babura to revalidate his All Progressives Congress’ membership for the ongoing nationwide registration exercise.

The beggars were seen in their hundreds without facemasks, waiting for the usual handouts given to them whenever the governor visited his hometown.

It was further gathered that the beggars waited for over seven hours to see him.

On his arrival, they waved and hailed the governor as he entered the house with his guests.

Trouble however started when they lost their patience after waiting outside for hours and did not get any handouts. Instead, they were allegedly harassed by security operatives who prevented them from gaining access to the residence.

They refused to leave and later dislodged the security men stationed at the entrance of the governor’s residence.

One of the beggars, Malamai Larai Hamisu, said they were at the governor’s residence to seek his assistance.

She said they were financially handicapped due to abject poverty bedevilling the community, adding that they were harassed and abused by the security personnel attached to the gate of the residence.

She said, “We want to lodge a complaint with the governor about the ravaging poverty and other social vices attributed to economic hardship. We also want to complain about the untold hardship faced by the underprivileged which means they cannot afford three square meals a day.”