The Twitter user said her friend discovered that the man has been married for five years after asking her to terminate her pregnancy.

A woman took to Twitter to narrate how her friend met a guy two months ago, got pregnant by him and then asked to procure an abortion.

The Twitter user Adeola with the handle @dearolaa  said her friend later discovered that the man has been married for five years; information he hid from her.

Read the story as she shared on her Twitter handle below;

''This guy impregnated my friend and told her to go take it out. It’s so sad. Another confirmation that men are scum. They met two months ago on her birthday and she found out she’s pregnant now. I kept wondering why a comfortable guy who says he loves you won’t want to settle down.

I advise she finds out more about him because his Instagram only has his business posts. No family portraits or anything. Check his Facebook I advised. After a long digging she found a post he was tagged on five years ago. It was his wedding pictures.

Dude has been married for  5 years and he never mentioned it.'' 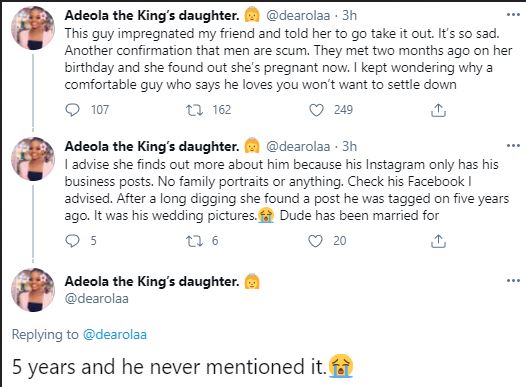