A Nigerian police officer has embarrassed himself after failing to assemble his gun during a competition with a soldier. 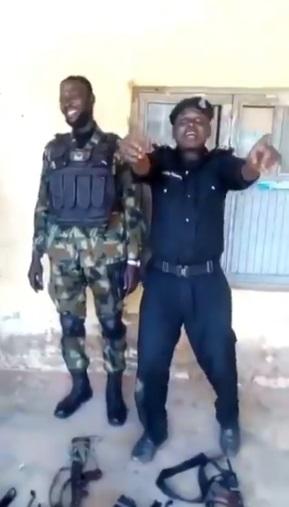 The army and police officers competiting
A police officer who couldn't assemble his gun while competing with a soldier has become a laughing stock on social media.
This happened after a viral video captured the officer of the Nigeria Police Force in action. Assembling and disassembling a firearm are basics knowledge acquire during recruitment into any government firearm-carrying force.
In the video, the police officer was tasked to compete with a military man on who would finish first on dismantling a gun and rearranging back.
The policeman was able to detach only a few components from his rifle, unlike the soldier who detached the firearm into individual pieces and still finished first when asked to reassemble.
Watch the video below: