Speaking to SaharaReporters, Mary said Gbanwuan allegedly doused her with hot stew over the assumption that she would leave him for another man with a healthy sperm count. 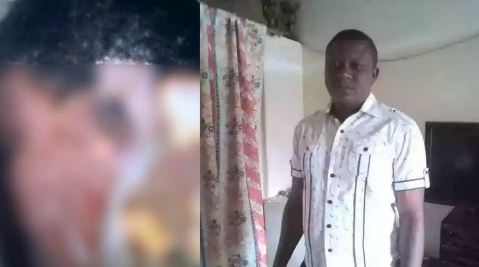 A young lady identified as Mary Sunday has alleged that her fiance who is a policeman identified as Isaac Gbanwuan, is being shielded by the force despite pouring hot stew on her after she found out that he had a low sperm count a few weeks to their traditional wedding.

Speaking to SaharaReporters, Mary said Gbanwuan was diagnosed with low sperm count days after their introduction ceremony, and that shortly after, he allegedly poured hot stew on her over the assumption that she would leave him for another man with a healthy sperm count.

She stated that though he had been placed on medications, Gbanwuan suspected every phone call she had was from an imaginary lover and accused her of having an affair with men around her, including her pastor.

“He was diagnosed with zero sperm count and was placed on medication. He started suspecting every call that I had on my phone. He accused me of trying to run away because of his predicament. Everyone around me then, as long as you are a man, you must be going out with me. He called everyone, including my pastors, and accused them of having an affair with me.

We already had our introduction, we were about to do our traditional marriage when I discovered he had the challenges.

I threatened to leave him if he didn't adhere to the doctor's advice but I didn't mean it though. I just wanted him to take his prescription seriously.”she said

Narrating the incident that led to her deformation, Mary said she had followed Gbanwuan to the hospital for his treatment and while coming back, she got a call from her aunt who was on her way to Lagos from Akwa Ibom State. She said the language barrier between them and the long conversation she had with her aunt made Gbanwuan paranoid.

“Gbanwuan suspected that I was calling another man and had probably disclosed his medical condition to the person, that I couldn't talk to a fellow woman for such a lengthy period. Immediately we got home, he started beating me. He's from Benue State while I am from Akwa Ibom State, so he doesn't understand my language. I tried to convince him but he kept on beating me.

When I couldn't bear the beating anymore, I decided to force myself out of his room and ran to his neighbour who was also his very good friend at Pedro Police Barracks, Shomolu. I went to her to seek refuge but Gbanwuan chased after me. She was in her kitchen cooking stew. I shouted for help and she quickly responded. She tried to stop Gbanwuan while I was hiding behind her; all the kicks and punches Gbanwuan threw at me landed on her body.

I escaped into the kitchen when I saw she had left me to face Gbanwuan. Apparently, he overpowered me and had access to the kitchen. I shut the door. I tried to lock it from inside but couldn't as Gbanwuan was pushing it from outside. He came in, the lit stove with the stew that was on it, he dumped everything on my body. The stove exploded and I was on fire. I ran out of the kitchen in search of water. People downstairs saw me covered in flames and ran to my rescue. They poured water on me and rush me to the hospital.”

Mary said she spent four months at Christiana Hospital, a private hospital in Shomolu where Gbanwuan only visited her to mock her. She said it was her family members that picked up her medical bills.

“Later, they dragged Gbanwuan to Pedro Police Barracks where the bill was split into two for my family and Gbanwuan. He signed an undertaking to pay in instalments. The doctor at the hospital paid part of the bill. Gbanwuan paid N90, 000, my family paid N140, 000 and the rest was paid by the doctor. The bill was around N300, 000.”Mary said.

She further stated that she was later transferred to the National Orthopaedic Hospital, Igbobi, Lagos, where she spent 6 months. She said Gbanwuan never visited her at the hospital nor paid the medical bill.

A distraught Mary said while in the hospital receiving treatment, Gbawuan sent her sister a message asking her to move on with her life. She said a few weeks later, she received information that Gbawuan had gotten married to another lady.

“He got married while I was still struggling in the hospital. My sister wanted to react but people advised her not to do so to avoid two people going down. In 2016, four years later, I lost my sister, my breadwinner. When I lost her, my world shut down, I didn't know where I was, I saw objects in twos.

I was frustrated and started looking for ways to survive. I don't have parents. I have no one anymore. I called my lawyer, she offered me accommodation in Abeokuta so I relocated to Abeokuta in Ogun State.”

She said she approached the Lagos State Domestic and Sexual Violence Response Team at Alausa to get justice. She stated in her interview that a letter was written to the Attorney General and former Lagos State Governor, Akinwunmi Ambode, and that she got an immediate response after which she was sent to India for surgeries.

“I did two stages out of three before coronavirus shut down the whole world. I still need to do more surgeries,” she said.

“The case is already in court but the police refused to produce him. Please, I want him to appear in court. They have been shielding him since 2012. He is number 3 on the list of officers to be prosecuted during #EndSARS protest. He is still serving. He has not been arrested,” she said

According to her, the Director of Public Prosecutions in Lagos sent messages to the state police command twice, but no positive response followed them. She said petitions were also sent to the Inspector-General of Police by Lagos State, without a response.

Mary who is a graduate from the University of Nigeria, Nsukka, also said the Lagos Police Command once sent a lawyer to court, who "promised to bring him to court on the next adjournment date, but both the lawyer and the policeman have failed to come till date".

"My way to get justice has been tough and narrow. My sister tried to get justice for me but couldn't as the police failed to produce him; lies upon lies were all we got from the police. So, my lawyer dragged the Federal Government to the ECOWAS court for failing to prosecute him. Till now, Nigeria Police Force still doesn’t want to bring him out.

I have lost my two pinnae (the external part of the ear), and fingerprint. My right ear can't hear sounds anymore. I also lost my sweat glance, I can't sweat anymore. Doctors said nothing can be done to restore it. It was completely damaged by the flame. I don't go to work. Even if I get a job, it will be difficult because of the heat.

Eating a square meal a day remains a miracle. if I expose myself to the sun, I can collapse. I don't put on clothes for a long time. It has no remedy. It will remain like that till my last day on earth except a miracle happens.”