It has been revealed that a Nigerian pastor prophesied about the deadly Abuja plane crash before it happened. 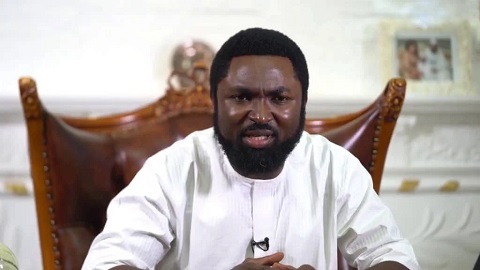 Prophet Omale
The plane crash that happened on Sunday was reportedly prophesied by a Nigerian pastor.
The pastor identified as Prophet Emmanuel Omale is the founder of Divine Hand of God Prophetic Ministries International, based in Abuja.
According to DailyPost, prophet Emmanuel Omale, foresaw the military plane crash that happened in Nigeria’s capital, Abuja on Sunday.
The plane crash, which occurred near the Abuja airport at the weekend, left all military officials on board dead.
A video now circulating on the internet shows the Abuja-based prophet revealing that the incident could happen and called on Nigerians to pray.
The Nigerian Air Force plane had an engine failure on Sunday, leading to the death of seven people. The incident happened near the Abuja airport.
But in a video which was part of 2021 prophecies, the senior pastor hinted on the incident and called for precautions.
Recall that Omale released 32 prophecies for the running year and the 14th prophecy is specifically on the crash.
He had asked Nigerians to pray so as to avert the negative impact of the prophecy.
Omale, however, prayed for the souls of those that lost their lives in the crash during his church service on Monday, asking God to grant the family, loved ones and the entire nation the fortitude to bear the irreplaceable loss.
Watch video below:
Top Stories