The Twitter user who disclosed that he spent 40 hours in his cell, alleged that live rounds were fired inside the club. 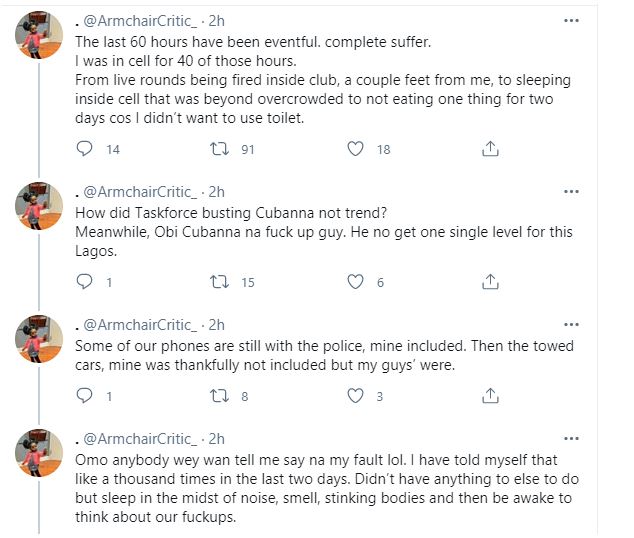 A Nigerian man who was arrested alongside others at Cubana night club for flouting the COVID-19 protocols has shared his harrowing experience.

@armchaircritic_ who disclosed that he spent 40 hours in the  cell, alleged that live rounds were fired inside the club.

"The last 60 hours have been eventful. complete suffer. I was in cell for 40 of those hours. From live rounds being fired inside club, a couple feet from me, to sleeping inside cell that was beyond overcrowded to not eating one thing for two days cos I didn’t want to use toilet.

How did Taskforce busting Cubanna not trend? Meanwhile, Obi Cubanna na fuck up guy. He no get one single level for this Lagos.

Some of our phones are still with the police, mine included. Then the towed cars, mine was thankfully not included but my guys’ were.

Omo anybody wey wan tell me say na my fault lol. I have told myself that like a thousand times in the last two days. Didn’t have anything to else to do but sleep in the midst of noise, smell, stinking bodies and then be awake to think about our fuckups.

Undercover policemen enter Cubanna, order bottle of XO, drank it then stood up went to the door/dj boot switched off music and announced that we were under arrest. That’s how they easily breached the place.

Story of how we were the last batch of offenders to be carted away from Cubana that morning. We hid upstairs in The Grind for hours before they managed to breach it on their third try. We left V.I around 7am lol. My set sha stressed them small".