Men of the Economic and Financial Crimes Commission have arrested two Dutch fraudsters in Rivers state. 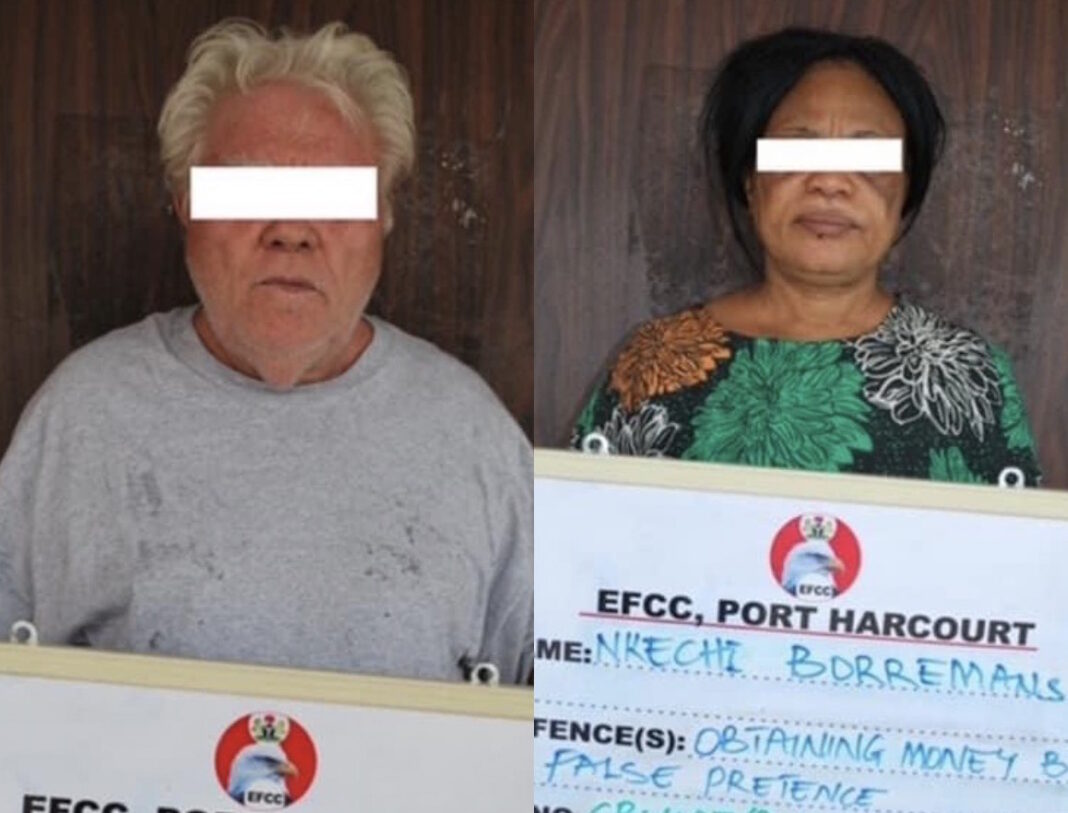 The Dutch couple after they were arrested
A Dutch couple, Peiter Borremans and Nkechi Borremans have been arrested in Port Harcourt for allegedly engaging in fraud.
According to the The Port Harcourt Zonal Office of the Economic and Financial Crimes Commission (EFCC) alongside Lagon Trade Limited for suspected $330,000 fraudulent deals involving a Marine Tanker Vessel
They were brought before Justice E.A Obile of the Federal High Court, sitting in Port Harcourt, Rivers State, on Tuesday.
A statement by EFCC Spokesperson, Wilson Uwujaren, said the suspects were arraigned on two- count of conspiracy and obtaining by false pretences contrary to Section 1(1) (a) and (2) of the Advance Fee Fraud and Other Fraud Related Offences Act 2006 and punishable under Section 1(3) of the same Act.
They pleaded “not guilty” to the charges when they were read to them.
Following their pleas, the prosecuting lawyer, N.A Dodo prayed the court for a date for commencement of trial and for the defendants to be remanded in a Correctional Centre.
The defence lawyer, C. A Okowanya, informed the court of oral applications for the bail of his clients and prayed that the defendants be remanded in EFCC custody following the second wave of COVID-19.
Justice Obile adjourned the matter till March 31, 2021 for commencement of trial and remanded the defendants in EFCC custody.
The statement said: “Trouble started for the couple when a petitioner alleged that his company, Jackkyson Multi Services Limited and Alot General services Limited, offered to purchase a Marine Tanker Vessel from Lagon Trade Limited $1,100,000 and made a part payment of $330,000.
“The defendants allegedly vanished into thin air after collecting the money and all efforts to get a refund or delivery of the Vessel proved abortive”.
Top Stories