The Salami panel report was itself submitted in November 2020, but the details of the report nor its recommendations have not been disclosed to the public since then. 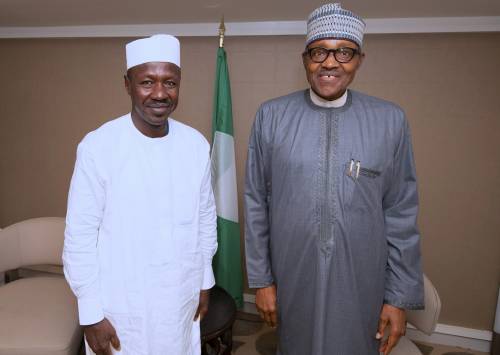 This is an exclusive SaharaReporters report

Cabals in the Presidency have schemed to ensure that President Muhammadu Buhari does not act on the Justice Ayo Salami’s probe report on immediate past acting Chairman of the Economic and Finan­cial Crimes Commission, Ibrahim Magu, submitted since 2020.

The Salami panel report was itself submitted in November 2020, but the details of the report nor its recommendations have not been disclosed to the public since then.

SaharaReporters learnt that one of the recommendations in the report was the replacement of Magu by a new chairman but other recommendations which indicted “powerful individuals” in the government were abandoned as the entire report might have been discarded.

Magu had been indicted in a memo to President Buhari by the Attorney-Gen­eral and Minister of Justice, Abubakar Malami, after which he was suspended in July 2020 and replaced then by Mohammed Umar, the then EFCC’s Director of Operations.

Magu was then made to face the presidential panel headed by Justice Salami, former President of the Court of Appeal.

The former EFCC chairman, during his trial, had exposed several infractions committed by Malami, with the probe report believed to contain more damning evidence against top shots in the Buhari administration.

“The cabals around the President do not want the report to be revealed to the public or acted upon because it is too indicting. Magu’s lawyers revealed certain details because the former boss would not go down alone. Magu’s hands were soiled but he was not the only culprit,” a top source revealed.

“President Buhari on December 4 had set up a four-man committee to review the report of Salami on Magu. The committee is supposed to present a white paper on the Salami report. Both the white paper and the report have neither been sighted nor acted upon,” the source added.

The committee is made up of two representatives from the office of the Chief of Staff to the President and two from the Office of the Secretary to the Government of the Federation.

This is not the first time that President Buhari would not act on investigative reports concerning the EFCC based on manipulations allegedly from the AGF and other cabals.

SaharaReporters had on Thursday, February 18, reported that a 13-page investigation report by the EFCC, indicting the new Chairman, Abdulrasheed Bawa, who was then the Port Harcourt Zonal head was forwarded to President Buhari in 2019 but the President failed to read or act upon it.

SaharaReporters had obtained the report, titled, Re: Alleged Case of Conspiracy, abuse of office and criminal diversion of Federal Government Properties, in which the suspect was Abdulrasheed Bawa, and detailed how he was recommended for disciplinary actions.
It had been reported that the report was forwarded to the President’s office, but the AGF influenced how it was dumped and not acted upon by President Buhari.

Malami had ensured that Bawa was spared and the erstwhile embattled acting Chairman, Magu, was ousted from office before actions would be taken on the report.

“The report was never read by Buhari because he was very unaware of his environment and doesn’t read. That report was the full details of Bawa, the newly nominated EFCC Chairman, as sent to Buhari.

“The AGF also quickly intervened and covered up the crime by refusing to approve of charges to be filed against Bawa and others. Magu was removed before he could act,” a top source had revealed to SaharaReporters.