The Oba of Lagos, Rilwan Akiolu has accused protesters who raided his home of stealing millions of dollars. 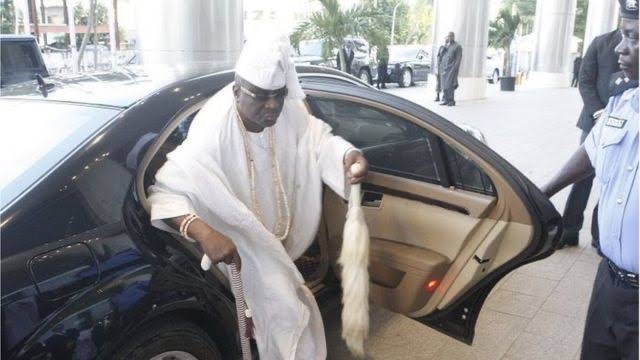 Rilwan Akiolu
Protesters who invaded the palace of the Oba of Lagos, Rilwan Akiolu have been accused of stealing $2 million and N17 million belonging to the monarch.
Akiolu made the disclosure on Wednesday.
He spoke at the Glover Hall Memorial Commissioning, Lagos on Wednesday.
Akiolu told the people present at the event that he wanted to say it publicly that #EndSARS protesters stole $2 million and N17 million in his palace.
The monarch lamented the devastation of Lagos by #EndSARS protesters, saying that the magnitude of devastation was greater than anywhere in the country.
He decried that about 130 buses were burnt by the protesters and that his palace was also invaded.
“Those who did the Iga Iduganran, I can now say it publicly that they stole from my palace two million dollars cash and N17 million, I am now saying it publicly.
“I am not a wealthy man, but I am a contented person and Insha Allahu, I will continue to be rich,” Akiolu disclosed.
“Those who committed the offence would not have done that if they knew the implication. But as a father, I won’t place any curse on them,” he added.
Speaking at the event, Lagos State Governor, Babajide Sanwo-Olu said the completion and formal commissioning of the remodeled Glover Memorial Hall reflected government’s determination to rebuild Lagos, revamp historic/public assets and also develop the Entertainment, Creative, and Tourism Sector, which is one of the pillars of the T.H.E.M.E.S Agenda.
He said his administration was mindful of the fact that the tourism and entertainment sector is an integral part of socio-economic development, and the overall wellbeing of the citizens, which is why the sector would not be neglected in government’s drive to make Lagos a mega city.
Sanwo-Olu said although, the coronavirus pandemic and the mindless destruction which followed the EndSARS protests had a shattering impact on the economy, “we are Lagosians with the resilience, tenacity, strength and courage needed to overcome challenges and other vicissitudes. We are consolidating the gains of the past and charting fresh development trajectories for the future, with our focus on socio-economic gains that will outlive this administration.”
He said it was in line with this that government was providing the needed support for the entertainment and tourism sector to recover from the pandemic even as government provided the institutional framework for creative practitioners to excel and prosper.
“Today’s event signals a gradual return of activities within the tourism and entertainment sector. It is a boost for our creative practitioners and entertainers as well as the necessary catalyst for economic growth because if we properly harness our human and capital resources, tourism and entertainment will become major contributors to socio-economic growth and development.
“One of the ways in which we have been engendering economic growth is by channeling resources to productive sectors like the entertainment and tourism industry. We have, therefore, initiated several deliberate efforts and interventions to ensure that our creative practitioners are able to find their feet in the Post COVID-19 era.
“We have disbursed N1 billion to practitioners in the tourism, hospitality and entertainment sector as a financial stimulus to get the sector moving again and to overcome the challenges caused by the pandemic,” he disclosed.
Sanwo-Olu assured that the remodeled Glover Memorial Hall would not only boost activities in the entertainment and creative sector, but would also restore the glorious days when it served as a relaxation point for Lagosians, including those who live and work on the Island.
“It is a testament to a splendid past and an indicator of a more glorious future in which Lagosians have the jobs and opportunities that they require to flourish. On our part, we will not relent in fostering collaborative investments for the advancement of our shared prosperity,” he said.
Top Stories