The suspect was arrested after he snatched a Toyota Highlander from the owner at gunpoint. 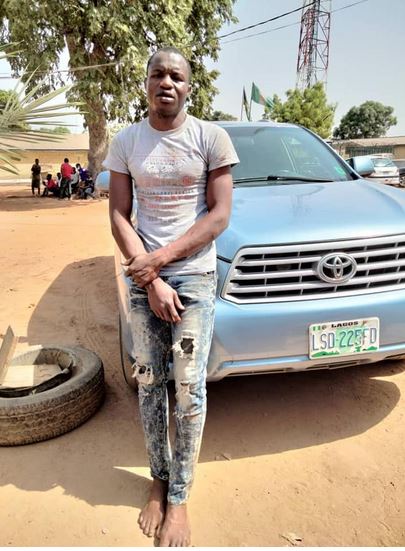 A notorious car snatcher identified as Faisal Salihu, has been arrested by operatives of the Nasarawa State Police Command at New Nyanya, Karu Local Government Area of the state.

Spokesperson of the command, ASP Rahman Nansel, who disclosed this in a statement on Thursday, March 4, said the suspect snatched a Toyota Highlander from the owner at gunpoint.

"On 03/03/2021 at about 2300hrs, information was received that one Toyota Highlander, Sky blue in colour with registration number: LSD 225 FD was snatched at gunpoint at Zuba in the Federal Capital Territory, Abuja," the statement says.

Upon receipt of the information, the Commissioner of Police, CP Bola Longe directed Police operatives of the Command to be on the lookout for the stolen vehicle and arrest the perpetrator of the act.

"In compliance with the Commissioner of Police directives, Police Personnel attached to New Karu Area Command while acting on credible intelligence, arrested one Faisal Salihu `M` 27years of Deidei Dakwa area of Federal Capital Territory, Abuja in his hideout at New Nyanya, Karu LGA of Nasarawa State, where the said Vehicle was recovered from him as exhibit. The suspect has confessed to the Commission of the Crime and investigation is ongoing." ASP Nansel said.

Meanwhile, the Commissioner of Police has called on members of the public to at all time, volunteer timely information that will enable the Police checkmate the excesses of criminals thus, dwarfing their enterprise.