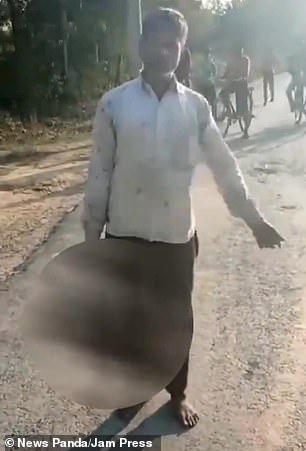 Sarvesh Kumar, pictured, cut off his daughter's head because he did not approve of the 17-year-old's relationship.

Sarvesh Kumar, a father of four kids has killed his own daughter.

The man decapitated his 17-year-old daughter and then carried her head through the streets because he did not approve of her boyfriend.

He was on his way to a police station after cutting off his daughter's head as part of an honour killing.

Footage shows one man searching the father as he checks his clothing.

Police officers ask the man his name, where the head is from and whose head it was.

Kumar admitted to beheading his daughter with a sharp object as he was unhappy with the relationship she was in, NDTV reports. 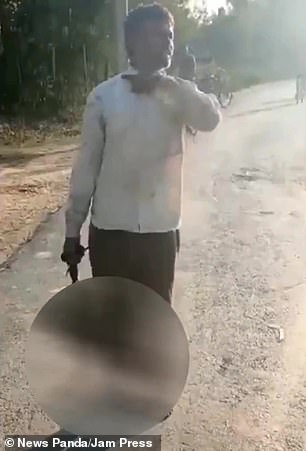 Residents spotted the man, pictured, walking with the head in the village of Pandetara

'I did it. There was no one else. I closed the latch and did it. The body is in the room', he said.

He also claimed that he would have killed her lover too had he been able to find him.

Kumar was arrested by police and taken into custody. His wife has since been arrested.

Police found the body of his daughter at the family home and have sent it for a post-mortem examination.

An officer has been suspended as he was pictured carrying the head 'inappropriately', according to local media reports.

Uttar Pradesh recorded the highest number of crimes against women in 2019, according to National Crime Record bureau data.

The state also recorded the highest number of crimes against children with 7,444 cases, followed by Madhya Pradesh (6,503) and Maharashtra (6,402).