The majority of the drivers participating in the protest are currently occupying Ketu bus stop, along the road. 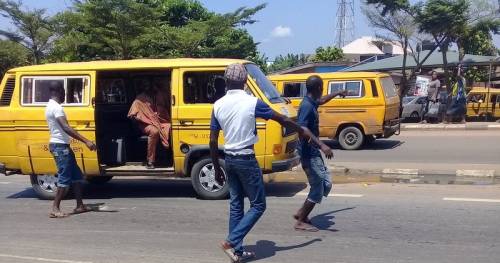 According to a report by SaharaReporters, drivers of Lagos yellow commercial buses, popularly known as danfo plying the Mile 2/Badagry expressway on Friday protested against extortion by touts and security operatives.

The majority of the drivers participating in the protest are currently occupying Ketu bus stop, along the road.

SaharaReporters gathered that the development has left many passengers around the area stranded.

According to the drivers, they have no more money to pay the louts, who take over N1, 000 from them for each vehicle daily.

The protesters added that there are too many security checkpoints on the expressway, and that they are being extorted excessively.

They also complained about harassment and extortion by police, Vehicle Inspection Officers and Federal Road Safety Corps officials which they said had worsened recently.

Some of the areas affected are Agbara to Iyana-Era, Igbo-Elerin, Okokomaiko, and Iyana Iba.

SaharaReporters learnt that some commuters were left with the option of commercial motorcycles, who charged N3, 000 from Iyana-Era to Mile 2.

“A lot of commuters plying the road are presently stranded and may remain so but the drivers are determined to keep up the strike until the extortion of drivers on the road is stopped by the government.

“The only major reservation expressed by some is that the police may be deployed to unleash terror on the drivers anytime soon.

“They say while some may be arrested, they are conscious that many of them may be killed by the erratic officers who would be deployed to crush the strike by any means necessary,” a resident of the area told SaharaReporters.