Details how the Economic and Financial Crimes Commission under Ibrahim Magu re-looted 222 assets have been revealed. 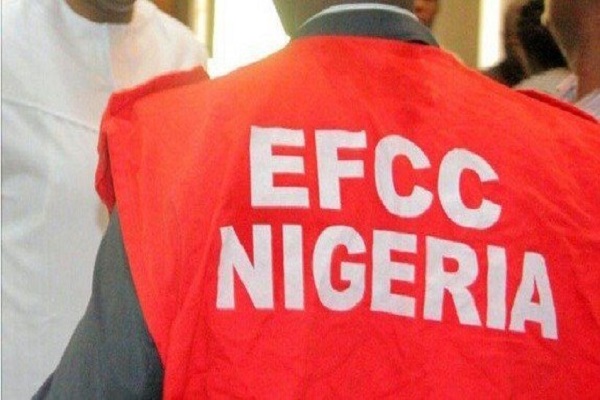 EFCC
It has been revealed that the Economic and Financial Crimes Commission re-looted 222 assets worth N1.63trilloin under its ex-chairman, Ibrahim Magu.
A witness, Ngozika Ihuoma revealed this before a Federal High Court in Abuja on Thursday.
The money was recovered by the defunct Pension Reform Taskforce Team.
Ihuoma appeared as the first defence witness in the ongoing trial of the erstwhile Chairman of the disbanded PRTT, Abdulrasheed Maina.
He told the court that Magu admitted before the Justice Ayo Salami Judicial Commission of Inquiry that he shared most of the properties based on a presidential directive.
“Magu admitted before Salami that he shared and allocated most of these properties to his friends, associates and colleagues under some presidential directives, but failed to make available to the commission the evidence of that presidential directive,” he said.
The witness told the court that he was a management consultant.
He said his firm, Crincad & Cari Nigeria Limited, was contracted by the PRTT for consultancy service.
He told the court that one of the choice properties the PRTT recovered and handed over to the EFCC was grossly undervalued from N6bn in 2011 and sold to a renowned lawyer in 2015 for N1bn.
“One of the properties in question located at No. 42 Gana Street, Maitama, was illegally acquired by a renowned lawyer while the property was still subject to litigation,” the witness added, insisting that EFCC should be made to account for all the recovered assets.
Top Stories