She narrated the ordeal that pushed her into the national struggle saying that as a teenager she hated injustice, corruption, poverty ravaging the country. 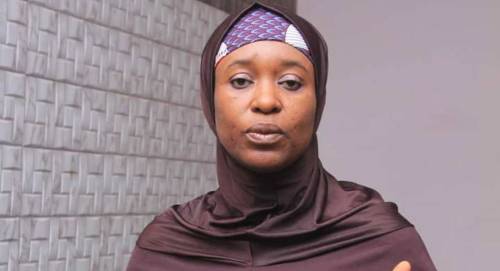 Aisha Yesufu, a human rights activist and co-convener of BringBackOurGirls, has said she joined the national advocacy shortly after her 40th birthday, SaharaReporters reports.

She narrated the ordeal that pushed her into the national struggle saying that as a teenager she hated injustice, corruption, poverty ravaging the country.

Yesufu said this during the International Women’s Month Special on Rubbin’ Minds programme on Channels TV, monitored by SaharaReporters Sunday.

While she said she had been fearless and making demands from life since age 4 despite the environment she grew up in, Yesufu thought she was going to be hit by a bullet and die during the #EndSARS protest last October.

“I have always been at the advocacy work. Remember my demands at the age of 4. That was actually advocating for myself. Anywhere I saw injustice, I never would look the other way.

“And so in 1992, was when I had my first protest and I was in the university. That was my year at the university and I can’t even remember what the protest was all about. There were others and that as far back as 1992.

“On the 10th of October during #EndSARS and that picture that went viral. That was not even the most moment at that event, we were protesting and the police started shooting teargas canisters, everybody ran away.

“I refused to run away, I raised my hand and walked slowly and the police were shooting at me and I could hear the bullets flying. I could see the teargas canister.

“At that moment, I thought I was going to die literally and I said to God, I said look, let it be one single shot and be gone. Because I didn’t want a situation whereby I would be on the floor in pain and some policemen would stand over me and be gloating.”

Speaking on the courage that she has garnered for her to be at the forefront of battles against the excesses of government, she attributed it to reading a lot of books from childhood. She also talked about her financial freedom which has contributed to her voice in society.

“Maybe it was from the books I read because I used to be an avid reader. I was extremely stubborn. Maybe the children called stubborn children, I was one of them. I do not fear any man, I only respect. I was less than 10 when I said to myself that the worst thing any human being can do to me is to kill me and I’m going to die anyway, so that’s not really the worst thing.

“But in the case of national advocacy, for me, it came after my 40th birthday. I turned 40 on the 12 of December, 2013 and I realised I had become the problem of Nigeria. As a teenager I hated Nigeria, I hated the injustice, I hated the corruption, I hated the poverty, I hated the fact that adults were doing nothing while our country was going this way. And one day, I was 40 and I realised I had become the adult who was also doing nothing and there were also children that were my age who were going through so much right now and I said to myself from now on, I am going to focus on national issues.

“But before I focused on a national issue, I have to work on something and that was my financial independence. Remember, I grew up poor. When you’re poor in Nigeria, you are faceless, nameless, and voiceless. You are seen as nothing. You’re cancelled already and I never wanted that for my life. So, all through up to 40, I worked on my financial independence. I’m a trader, I’m a businesswoman. I buy and sell.

“On that 40th birthday, I said to myself I’m going to give Nigeria the next 40 years of my life if God gives me another 40 years and four months after, Chibok girls happened. And when that happened, I joined the protest, and Nigerians heard me loud and clear.”