Akpoka and other suspected drug dealers were earlier caught on camera selling weeds suspected to be Cannabis Sativa before they were arrested. 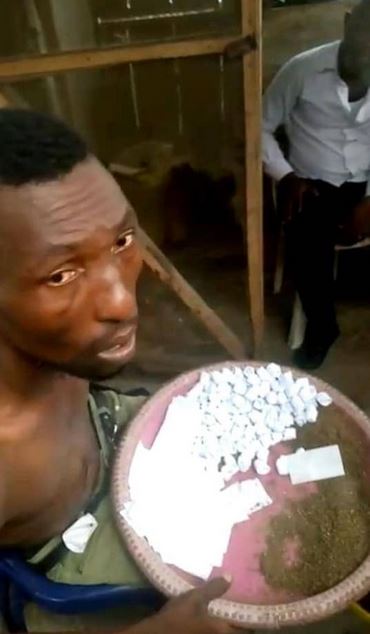 A notorious drug dealer identidied as Monday Akpoka has been apprehended by operatives of the Delta State Police Command following a raid at the black spot in Ubeji community, Warri South Local Government.

The Acting spokesperson of the command, DSP Edafe Bright, who disclosed this in a statement on Wednesday, March 17, said that Akpoka and other suspected drug dealers were earlier caught on camera selling weeds suspected to be Cannabis Sativa.

DSP Bright further disclosed that youths in the community shot and pelted stones at police operatives during the raid.

"One the 16/3/2021 at about 1845hrs, police patrol team attached to ‘A’ Division Warri raided a black spot at Ubeji community, a build up on earlier recognizance made where suspects were captured on under covered video tape comfortably selling suspected weeds believed to be cannabis sativa," he stated.

'Considering the aggressive and violent nature and resistance of the community youths against police effecting arrest, a formidable operational plan was drawn by the divisional police officer CSP T.Y Mahmud.

"The team identified the black spot and stormed in a record time despite the community youths resistance and attack on police through sporadic gun shots and pelting of stones. Policemen through courage and resilience were able to arrest one Monday Akpako ‘m’ who is the principal suspect and has confessed to be a major dealer in cannabis. Investigation is ongoing" he added.