Buhari’s withdrawal of consent came after Abba Kyari, the late chief of staff, pointed out anomalies in the contract signed by Monguno on March 27, 2017. 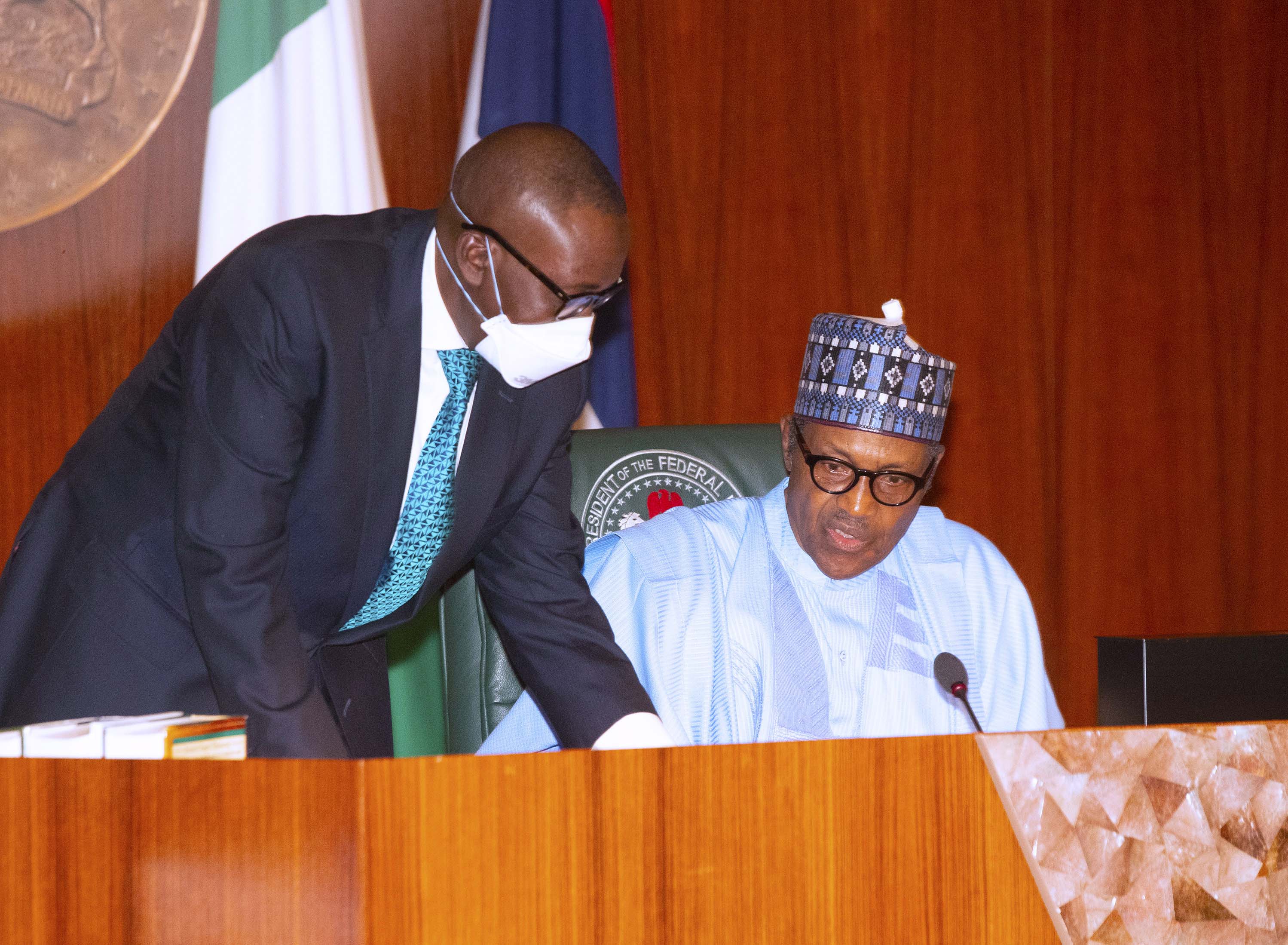 According to a report by TheCable, Nigeria's number one man, President Muhammadu Buhari withdrew an approval for Babagana Monguno, the national security adviser (NSA), to buy arms worth $2.51 billion from UAE in 2017 because the would-be suppliers are commission agents.

Buhari’s withdrawal of consent came after Abba Kyari, the late chief of staff, pointed out anomalies in the contract signed by Monguno on March 27, 2017 with the International Golden Group (IGG), the Abu Dhabi-based arms suppliers.

Also, following a N14 billion mark-up in an equipment purchase contract for the police by the office of the NSA in 2019, Buhari directed that henceforth, only the ministry of police affairs and the ministry of defence should be involved in arms procurement.

This effectively ended the involvement of the office of NSA in the process, a development believed to have affected his relationship with the president and service chiefs.

He recently alleged that the money approved for arms under the former service chiefs “is gone”.

TheCable also reported that Monguno does not have the kind of power and influence wielded by previous NSAs and looks increasingly isolated in the scheme of things.

Presidency officials in the know of the aborted arms deal told TheCable that Buhari had earlier instructed that no third parties or agents should be involved in arms purchase, maintaining that it must be a country-to-country transaction.

This is to make the contracts cheaper and protect the country from buying substandard arms and ammunition, he said.

In a letter dated April 5, 2017, Monguno had sought Buhari’s approval to pay $627 million “within eight days” to IGG as the 25 percent deposit for the supply of arms, ammunition and equipment to Nigerian armed forces.

Monguno, a retired major general and former commander of brigade of guards, also requested that the payment should be made from the excess crude account (ECA).

The only document the NSA attached to the letter was an IGG invoice, which did not carry any address or even the name of the signatory.
Advertisement

It only had IGG’s account details at First Gulf Bank in the UAE as well as the amount to be paid.

As it turned out, IGG is not a government agency but a private company in which the UAE had an interest.

This was unlike the other arms supply contracts Nigeria entered into — on a government-to-government basis — with the US and China which the defence ministers of the countries signed.

The IGG agreement stipulated clearly that the company would be sourcing the arms and ammunition from the UK, US, EU, Asia and South Africa — a confirmation that they are not manufacturers but commission agents.

Meanwhile, the Central Bank of Nigeria (CBN), which was to make the money available, complained to the president that if the bank had to make a payment of $2,511,962,370 to IGG, the nation’s external reserves position would be threatened and they would not be able to defend the naira.

This was at a time Nigeria was just coming out of a recession following a crash in oil prices.

The CBN also expressed fears that the payment could be blocked by the US because of the intermediaries involved.

IGG had been indicted for illegal arms sales to Libya at a time there was a UN embargo.

According to a source in the office of the NSA, Buhari restated his directive that third parties or commission agents should not be involved in the purchase of arms.

Buhari took ill thereafter and went on medical leave to London, with Vice-President Yemi Osinbajo stepping in as acting president.

Osinbajo set up an armed forces and police emergency procurement committee (APEPC) with the need to support military operations in the north-east, Lafiya Dole, topping the agenda.

Monguno used the opportunity to re-present the $2.51 billion memo he had earlier sent to Buhari, raising his request to $2.6 billion to include the new approval for Lafiya Dole.

He said Buhari had already approved the sum but payment was not made because of his sickness and subsequent medical leave.

Again, he met a brick-wall as Osinbajo insisted that no third parties should be involved in the arms purchase.

With the $2.51 billion IGG proposal dead in the water, sources told TheCable, Monguno felt undermined by Kyari in the scheme of things but kept his cool.

However, Monguno renewed his face-off with Kyari after the 2019 general election which returned Buhari to office.

On May 27, 2019, Mohammed Adamu, the inspector-general of police, made a request to the NSA for the purchase of equipment, including arms and trucks, to boost the force’s operations.

He put the total cost at N32 billion.

In his submission, Monguno again brought in IGG, the Abu Dhabi-based group, as suppliers and raised the request to N46 billion — a mark-up of about N14 billion.

Kyari, again, raised objections against the involvement of IGG — which was to supply even Hilux trucks, according to the proposal sent by Monguno.

Hilux trucks are manufactured in Japan and can be sourced directly from the manufacturers or through their agents in Nigeria.

Kyari argued that it was better for Nigeria to buy the trucks directly from the manufacturers or enter an agreement with local plants such as Innosons.

Based on another memo from Kyari in which he raised objections to third-party involvement as well as the significant increase in the cost, Buhari directed that the purchase should be handled by the ministry of police affairs, TheCable learnt.

Buhari also directed that arms, ammunition and all equipment for the armed forces should, henceforth, be handled by the ministry of defence.

All purchases, the president instructed, must be done on a direct country-to-country basis with no middlemen and commission agents involved in order to save costs.

The disapproval by the president, sources told TheCable, enraged Monguno, leading him to write a series of stinging letters to various government officials to protest Kyari’s “meddlesomeness”.

He also raised the alarm over “threat to national security” and accused Kyari of issuing instructions to service chiefs, even suggesting that it was because of this “meddlesomeness” that Boko Haram was renewing attacks.

In his letters to to the president, ministers and security chiefs, Monguno said “such acts and continued meddlesomeness by chief of staff have not only ruptured our security and defence efforts, but have slowed down any meaningful gain that Mr President has sought to achieve”.

He accused Kyari of overriding instructions by the president.

WHO ARE THE INTERNATIONAL GOLDEN GROUP (IGG)?

Buhari, had, on a visit to the UAE in 2016, provisionally agreed with the crown prince of Abu Dhabi, Mohammed bin Zayed Al Nahyan, that Nigeria would buy arms from the country.

However, it was the International Golden Group, a privately owned company, that entered the picture when the deal was to be struck.

In 2002, Fadel Al Kaabi, an Emirati, set up the IGG headed by his uncle, Mohammed Hilal Al Kaabi, a former armed forces deputy chief of staff, according to Intelligence Online.

It also wrote that IGG sometimes “serves as cover for secret operations carried out by UAE outside its borders. In 2011, it sent large quantities of light arms to the rebel forces attacking the Gaddafi regime in Libya via Albanian state arms manufacturer Meico and Armenia’s DG Arms Corporation. In 2012 and 2013, a similar arrangement is thought to have been set up to help Syrian rebels fighting the regime of Bachar Al Assad.”

“Among the documents is an Aug. 14, 2014 ‘framework agreement’ worth US$ 169 million, signed by Ukrinmash, to supply weapons including 12,000 machine guns, 50,000 Kalashnikov rifles, and 2,000 rocket-propelled grenade launchers to South Sudan’s government. IGG, an Emirati firm, acted as broker,” the site reported.

IGG was also exposed over links with arms dealer the “notorious” Slobodan Tesic, who is close to Serbian President Aleksandar Vucic.

The relationship between Tesic and IGG was first exposed by a UN report on weapons deliveries to Libya despite an arms embargo on the country.