A prison warder has landed in serious trouble after she was caught having sex with an inmate. 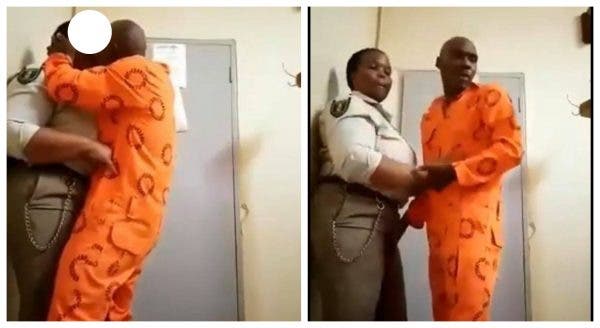 Female warder caught sleeping with an inmate in South Africa
A female warder has been suspended from work after she was caught in a video that has now gone viral sleeping with an inmate in South Africa.
This is coming after National correctional services spokesperson, Singabakho Nxumalo disclosed that a disciplinary process has been launched over the incident which occurred at Ncome Correctional Centre.
Graphic video clips of the encounter have raised questions about how the cellphone the prisoner used to film the sex escapade found its way into the prison.
The national correctional services spokesperson Singabakho Nxumalo told radio 702 on Wednesday March 17, that more prison officials might be punished if found culpable.
Nxumalo said;
“We have suspended the official involved and we’ve taken disciplinary measures against the inmate.
“The investigation is much broader than the two people seen on the video because ... We need to understand if it is just an isolated incident or if there is more to it and if there are other players."
The probe will look into how the pair managed to walk to and gain access to the office, and the origin of the cellphone which is regarded as contraband in prison.
He added;
“We do not want them [cellphones] in our centres. This is a classic case, a cellphone was used to record this.
"Cellphones are just one item in the long list of contraband items that are not allowed because they cause harm to the victims outside and used to plan other crimes. They could even order hits on others.
“It’s completely unpalatable. I don’t think that the nation would deserve to see something like that, captured in video, and you are correct, both of them [were] fully aware they are recording this thing.
“Sexual activities between inmates and correctional officials are shameful incidents that can never be ascribed to what is expected of our officials. The official involved has been identified and she will be subjected to a disciplinary process with immediate effect.
“Correctional officials are expected to abide by a code of conduct, and despicable acts of sexual activities with inmates shall never be tolerated. We appeal to those in possession of the video to refrain from disseminating it."
Nxumalo also told TimesLIVE on same Wednesday that claims shared on social media about the warder taking her own life, were not true.
Top Stories