Ganduje Speaks On "Dollar" Video, Vows To Deal With Those Behind It


The Daily Nigerian newspaper had published the now-viral video three years ago, with many calling out the governor for alleged involvement in corruption at the time. 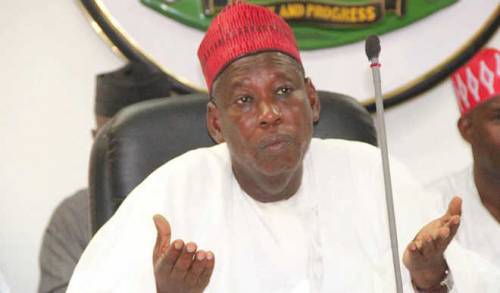 Abdullahi Ganduje, the Governor of Kano State, has once again said the 2018 video in which he was seen pocketing wads of dollars presented to him as a bribe is a manipulated one.

The Daily Nigerian newspaper had published the now-viral video three years ago, with many calling out the governor for alleged involvement in corruption at the time.

But speaking on Friday during a BBC Hausa programme, Ganduje said the video was manipulated, adding that "those behind it would be brought to shame soon".

The videos that were serially published in 2018 by Daily Nigerian were said to have been recorded in 2017.

The governor had immediately described the video as 'cloned' and sued the newspaper's publisher, Jafar Jafar.

The newspaper alleged that the dollars were part of a $5 million the governor received from a government contractor.

In the audience participatory programme of the BBC Hausa, the governor also responded to multiple questions from Kano residents on his government's policies on the privatisation of public asset.

Ganduje said rumours that his administration was selling off land plots at historical sites such as the city walls are mischievous.

He said the federal government owns such places and that the state government cannot tamper with them.

He said the government only allocated land to residents to build shops in front of the walls.