End Of The Road! Gang Members Who Steal Nigerian Vehicles And Sell Them In Niger Republic Nabbed (Photo) 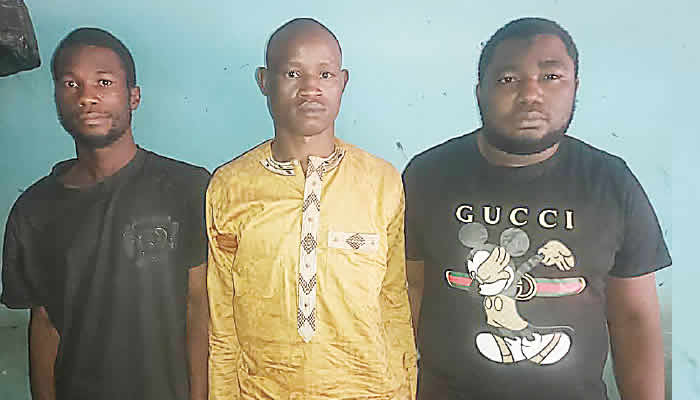 According to a report by The PUNCH, three suspected members of a carjacking syndicate allegedly involved in selling vehicles stolen in the Federal Capital Territory, Abuja, in Niger Republic, have been rounded up by the police.

City Round learnt that operatives of the Inspector-General of Police Intelligence Response Team acting on a tip-off mounted a road block along the expressway and arrested Shehu while he was driving a Hilux van to Kaduna.

Shehu aka Biggie reportedly told the policemen that he was taking the vehicle to Magaji in Zaria and that he had delivered 11 vehicles – mainly Toyota Corolla and Hilux – to the man between 2019 and 2020.

Three suspected carjackers who allegedly sold the vehicles to one Alhaji Baba in Niger Republic through Magaji were said to be at large. They were identified simply as one Abdul, Sherif and Bashiru.

It was gathered that Shehu led the detectives to arrest Magaji, who in turn led the operatives to nab Kano-based Zakari, said to be fabricating master keys used for stealing vehicles.

“Magaji is also into car theft and we recovered five vehicles, three Honda civic cars and two golf wagon cars, from him. We also arrested a key maker that fabricated keys for the gang. Alhaji Baba makes orders for the keys from which they use to steal vehicles,” a police source said.

Shehu, who claimed to be a graduate of Electrical Engineering, said he was into installation of meters and transformers but was accused of a fraud which made him spend 11 months in an Abuja prison before he was released on bail.

The father of two explained that he lost his clients’ trust and no one wanted to do business with him again, adding that Bashiru whom he met in the prison lured him into the gang.

He said, “I entered into an agreement at the court that I would be paying N20,000 to the complainant. When I left the prison, I had skin disease. I called Bashiru and told him my condition.

“In October 2020, Bashiru and I met again and he gave me N2,000. He asked me to meet him the next day at Mabuchi. When we met, he gave me a Toyota Corolla and asked me to take it to his friend in Zaria. The vehicle stopped midway and I called him. He said I should leave it there and return to Abuja. I asked why but he said I shouldn’t bother.

“When I returned to Abuja, I met him at Gwarimpa. He asked me to take a Toyota Hilux to Zaria for him. When I got to Zaria, he called and told me that the person that was to receive the vehicle in Zaria said it was late. He then told me to take the vehicle to someone in Kano which I did.”

Shehu, who said he was paid N30,000 for the first assignment, stated that he knew he was into a shady job when Bashir gave him another car to deliver to Magaji.

He said, “I had no option because I needed money to pay my debt. I transported 15 vehicles for him but four of them stopped on the road and I abandoned them. He paid me for 11 of the vehicles.

“I was taking a Hilux to Zaria in January when I was arrested by the police. I led them to arrest Magaji who was the person receiving the vehicles from me.”

Magaji said he was a middleman between Alhaji Baba and carjackers, adding that he got N20,000 on each vehicle he facilitated to Niger Republic.

“Before my arrest, I had stolen about five cars in Kano State using a master key and I sold all the cars at very low prices to one Nura who has a car stand in Kano. He bought each of the vehicles below N200,000 and sold them out to innocent buyers.”

Zakari said he collected N5,000 for each fabricated key and had been in the act for five years. He added, “It was Suraju who brought me into the gang. I was making master keys for Toyota and golf cars and had produced a number of keys for the gang.”