Speeding Driver Kills Himself And Pedestrian In A Lone Accident, Others Injured


The unfortunate incident occurred as an unidentified driver of a Lexus car was on top speed and lost control of the vehicle. 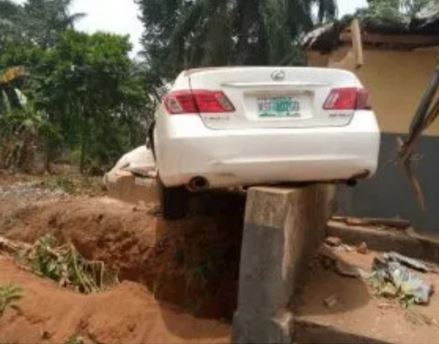 Speeding Driver Kills Himself And Pedestrian In A Lone Accident, Others Injured

A tragic accident has claimed the lives of a driver and a female pedestrian who he hit along Obiuno Road in Igbo Ukwu, Anambra State, leaving others badly injured.

The Federal Road Safety Corps (FRSC) confirmed the death of the pair in a lone accident that occurred on Saturday, March 27.

The FRSC Sector Commander in Anambra, Mr Andrew Kumapayi, told the News Agency of Nigeria (NAN): "an unidentified driver of a Lexus car with registration number KSF403GD was on top speed and lost control of the vehicle.

"He knocked down two women crossing the road and crashed into a building by the side of the road.

"The victims were taken to Apex Hospital in Igbo Ukwu by a good Samaritan before the arrival of FRSC rescue team from Igbo Ukwu Command.

"Their bodies had been deposited at the hospital’s mortuary."