It was gathered that Grace was attacked for using her phone to make a video recording of James’s father and two brothers, Ezekiel and Samuel, while allegedly assaulting a National Youth Service Corps member, identified simply as Jeremiah. 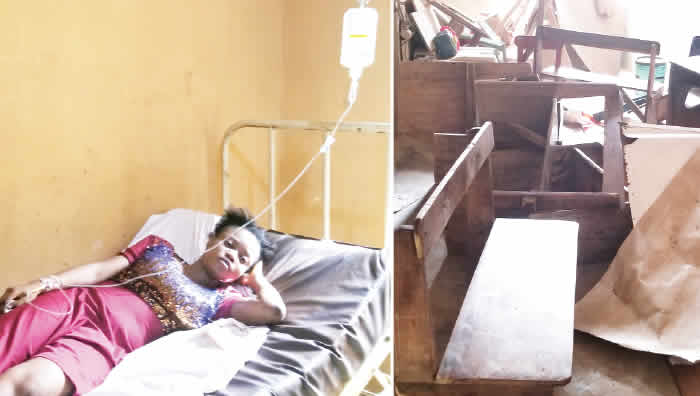 Grace and the scattered classroom

Grace Akinoso, a teacher at the Comforter City International School, Pakuro, in the Obafemi Owode Local Government Area of Ogun State, has been hospitalised.

She was hospitalized after members of the family of a pupil, James Efeniye, allegedly brutalised her on the school premises.

PUNCH Metro gathered that Grace was attacked for using her phone to make a video recording of James’s father and two brothers, Ezekiel and Samuel, while allegedly assaulting a National Youth Service Corps member, identified simply as Jeremiah.

Jeremiah was said to have punished James for acting rudely during the assembly, but one of his brothers, Hebrew, rushed out of the school to inform their parents.

During a visit to the school on Tuesday, one of the teachers, Sarah Orimisan, told PUNCH Metro that James’ father allegedly slapped the corps member when he got to the school.

She said, “During assembly this morning, Jeremiah was cautioning a pupil, James Efeniye, to behave well. But he started acting rudely and kept bragging; out of annoyance, Jeremiah got a cane and flogged him. I instructed James to kneel down and cautioned him against bragging. He said the school administrator slapped him in the face the previous day and Jeremiah caned him today (Tuesday) and I told him that his teachers had the right to do so if he misbehaves.

“I asked him what he did that made Mrs Ajayi to beat him and he said he told her that he could not see her stupid handwriting on the board. James brother, Hebrew, suddenly said he wanted to pick his bag from home, but I told him to go back to his classroom. I later heard that Hebrew found his way home to call his father, who came to the school with two of his elder sons, Ezekiel and Samuel. Immediately the father entered the school, he went to meet Jeremiah and slapped him.

“I rebuked James’ father for slapping Jeremiah and we informed the owner of the school, who instructed the school administrator to send all his children home. We don’t know what the children told their family members that prompted them to mobilise down to the school and scaled the school fence to gain entry when we refused to open the gate for them.

“When Ezekiel, Samuel, the twin and James all gained entry through the fence, their father, mother and a lady were outside asking for the fees they paid for their children. They also demanded the video recorded while they were assaulting the corps member. They entered the school, scattered the classrooms and started attacking one of our teachers, Grace, who recorded the video, and she collapsed in the process. We had to rush Grace to the Layo Clinic, where she has been receiving treatment.”

When PUNCH Metro visited the clinic, Grace was seen receiving a drip. She told our correspondent that the shock of the attack was responsible for her sudden collapse.

It was learnt that the incident was reported at the Mowe Police Division, where policemen were mobilised to the scene.

“The boy, who was alleged to have assaulted the lady, has been arrested and he is in detention. The father was also arrested but was permitted to take care of the medical expenses of the victim, who is still in hospital. The school administrator informed the police about the incident and investigation is ongoing,” he stated.