I Suffered Heartbreak When I Was Just 18 Years Old - Nigerian Singer, Ruky Olotu Tells Her Story


In this interview, the graduate of Business Information Systems recounts her experience in the industry, emphasising the hurdles up and coming artistes are made to go through. 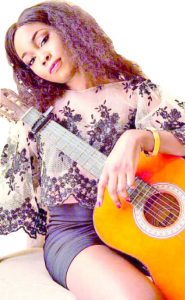 Oghenerukewe Olotu a.k.a Ruky Olotu has continued to pursue her musical passion after emerging first runner-up in the reality TV show, Project Fame, in 2014.

She formed an all-girl band, R-Cube that consisted of her sister, Ruona and cousin, Rubunu. In 2015, the band dropped its debut song/video, Show Dem and followed it up with appearances at top events.

R-Cube later took a break as members decided to pursue their individual interests. Olotu went solo and released her debut EP, Brave Love in March 2018. Since then, she has not looked back.

In this interview, the graduate of Business Information Systems recounts her experience in the industry, emphasising the hurdles up and coming artistes are made to go through. She also talks about love, romance and heartbreaks. Enjoy it.

Why did you take a break from music?

There was so much going on in my life, so I wanted to define what I really wanted to do and to be sure as well. When I took a break, I was also trying to get a job on the side. While waiting for that, I just had to come back to what I really love to do, which is music.

How would you define your kind of music?

I want to define my music as Neo-soul/Afro-pop. It is more of an eccentric type of sound that is in touch with my grassroots, which is Africa, and which is Nigeria.

How do you intend to penetrate the highly competitive music industry?

A lot of it is hard work, especially when you are an up and coming artiste. You have to find a way to create a brand that defines you as an artiste. So, I have to find a way that defines me that is different from the likes of Tiwa Savage and Yemi Alade. I try to do things that are different. That is why I took some time, I had to experiment with different sounds; I had to try not to sound like some artistes, even if I took inspiration from them.

Who are your mentors in the industry?

I like a couple of artistes. I like them because they inspire my sound. Way back, it used to be Brandy, Whitney Houston, Beyonce,  but now I am getting in tune with the new sound of artistes like Jhene Aiko, Ceaser and Tems.

What are your challenges?

There are countless challenges from finance to the current economic situation, and the fact that you are up and coming artiste. So, you have to really put in lots of capital to move around and connect with the various key players in the music industry. Also, the challenge can be how to get people to like your music.

After Project Fame, have you performed in any big concert?

Yes. I have performed in a few. The most prominent I could remember is Felabration. There’s also this event we used to do in Lagos – Artistes’ Night. It was really big.

Any plan for collaboration with big artistes?

Definitely.I will love to collaborate with artistes like Burna Boy, Tems and Tiwa Savage.

As a female musician, have you encountered sexual harassment?

It is actually everywhere, and not only in the music industry. It is something that we have to make women aware of, and that way they will be able to know that this is a general problem. Women should be confident and defend themselves and fight it. They should be able to say no and come to the public with it.

What has been the response to your latest single, Voodoo Love?

So far, people like it. I hear the listeners in Kano like the song and a few from outside the country too. We are still pushing it to make sure it reaches more people. Hopefully, more people will hear it and love it. We would soon start to promote the video for Voodoo Love.And from there we will try to key into some opportunities that come in.

You sing about love, how would you describe love?

Love is an amazing feeling that gives joy and brings happiness.

Are you presently in a relationship?

What’s your kind of man?

He must be patient, kind, hardworking, intelligent, and fun to be with.

Have you ever been heartbroken and how did you handle it?

Yes, I was heartbroken once when I was eighteen! I felt sad and angry, but determined not to let that happen to me again. So, I was fine.

You are hot and single, when is the wedding bell ringing for you?

The wedding bell would soon ring. I hope male artistes are asked this same question though.

What’s your greatest moment as an artiste?

Being on a stage performing for an audience. However, I believe I’m yet to experience the greatest moment.

And what about your lowest moment?

It’s not being able to work on more music, being doubtful of how the listeners will take it. And also when I was clueless to what direction to take with my music.

How do you handle your male admirers?

I try to appreciate them the best way I can.

What has a crazy male fan done to you?

Nothing much really, I guess I’ve not had one of such crazy fans. Some try to DM me on Instagram saying how much they want to meet with me.

Have you had any embarrassing moment as a musician? If yes, tell us about it.

Yes. It’s when I was singing in church and I completely forgot the last lyrics. I had to find a way to cover up.

What do you do outside music?

I do a bit of business, which is marketing and promoting artwork to people that can appreciate good art.

How do you spend your leisure time?

I stay mostly indoors. After working in the studio, I relax for sometime. I may decide to rest or sleep, but then I have to get back to work.

Where do we hope to see Ruky in the next five years?

I pray to see my songs being played around the world. I hope to be invited to perform on several stages in various countries. I see my music going very far and people loving and streaming it