Owerri Prison Attack: I Jumped Over The Fence When They Threw Explosives At Us - Police Officer Shares Story


A police officer who survived the attack staged by some gunmen at the police headquarters and prisons in Owerri has shared his story. 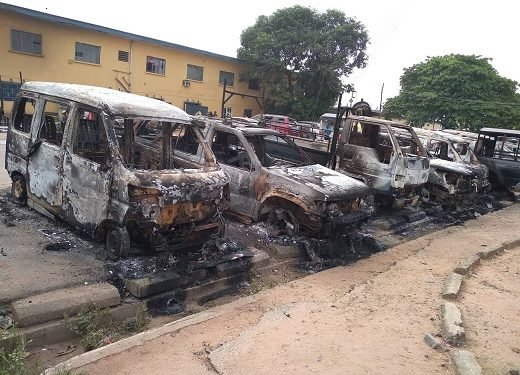 Imo police headquarters after attack
A police officer has narrated how he barely escaped after hoodlums attacked the Owerri Prison Facility and freed thousands of inmates in, early hours of Monday.
The hoodlums also attacked the Imo State police headquarters in Owerri, with an explosive substance.
A police officer on duty when the incident happened narrated how he escaped.
He said:
“They were over two hundred boys, with their cars singing a song of victory and when they reach the gate of our police headquarters they threw dynamite at us and the thing exploded and the vehicles caught fire especially the vehicle park.
“I jumped over the fence because they are many. When they started shooting bullets it got one of my colleagues in his hand and he fell down.”
Also when Vanguard moved towards the government house roundabout, two vehicles were also set ablaze by the hoodlums which burnt beyond recognition.
Top Stories