Residents In Mad Water Storage As Board Halts Supply In Abuja 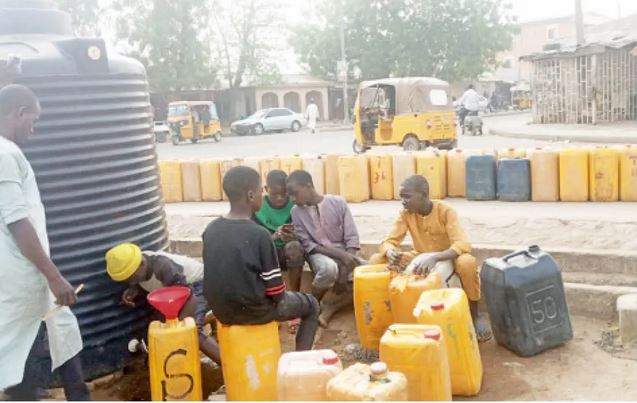 A report by Daily Trust has shown that just ten days after public water supply returned to some affected areas in Abuja, another water seizure is set to start from Friday evening.

This was announced by the FCT water board in a release, which been obtained by the Daily Trust.

The previous water supply interruption that affected Kubwa, Gwagwalada, Gudu, University of Abuja, and airport, lasted for 13 days, following an emergency work maintenance on a pipe channel, supplying raw water to two of the four water treatment plants from Usuma dam in the FCT.

In the announcement, the FCT water agency explained that the interruption was necessary in order to allow its engineers to carry out another work maintenance, this time, on the main trunk line that conveys water from the said treatment plant to Kubwa and other areas in Abuja.

Daily Trust gathered that almost half of the water supply meant to the aforementioned areas is being wasted away in the bush at two separate spots, located at Jabu and Chikakuri villages respectively.

As a result of the supply interruption, residents, especially around Kubwa which suffered most during the last water interruption, are using all available items in their possessions to store water as they not sure when the supply will return.

The water agency had announced that the water supply would be restored on Monday.

Daily Trust discovered that there are many other pipes across the agency’s supplying channels in the territory that are also wasting away their contents and the authorities have not set any date yet for the repairs.