In a letter written by her lawyer, Marshal Abubakar, on behalf of Falana and Falana chambers, the former minister expressed shock that she was listed as a director in Omojuwa’s media firm, Alpha Reach. 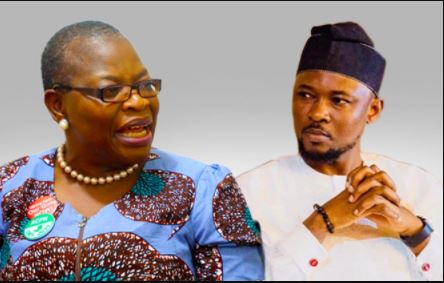 Oby Ezekwesili, a former Minister of Education, has written a letter to blogger and social media influencer, Japheth Omojuwa, for alleged impersonation.

In a letter written by her lawyer, Marshal Abubakar, on behalf of Falana and Falana chambers, the former minister expressed shock that she was listed as a director in Omojuwa’s media firm, Alpha Reach.

The revelation was made in a report by a foreign medium, BuzzFeed, which had exposed the role Omojuwa and other influencers allegedly played in the social media campaign for the release of alleged fraudster, Alex Saab, a Colombian who has been declared wanted in the United States and is facing extradition charges in Cape Verde.

Some of the influencers had their accounts suspended by Twitter for using their platforms to promote an ignoble cause.

Documents circulating online show that Omojuwa’s company, which was registered with the Corporate Affairs Commission in 2012, has Kaduna State Governor, Nasir el-Rufai, and Ezekwesili as directors.

The company, Alpha Reach, is believed to have played an active role in the campaign #FreeAlexSaab.

El-Rufai is believed to be a mentor to Omojuwa and was also the special guest of honour at the launch of his book in 2019.

However, Ezekwesili, who is the Co-Convener of Bring Back Our Girls Group, said Omojuwa must issue an apology to her and a public statement for using her identity without permission.

The letter titled, ‘Complaint Over Fraudulent Use of the Name of Mrs Obiageli Ezekwesili as a Director of the Alpha Reach Limited RC no: 1066507 Incorporated in 2012 Demand for Full Disclosure and Public Apology’ is dated April 9, 2021.

According to the letter, sometime in 2012, Alpha Reach Limited was incorporated at the CAC as a construction company and had listed as Directors; Omojuwa, Damilola Ogunleye, el-Rufai Nasir, and Ezekwesili Obiageli.

In 2017, a notice of change of directors (Form CAC7A) was filed through which the list of directors were altered and the name of Ezekwesili removed as a director and replaced with that of Indimi Ahmed Mohammed, the son-in-law to the President, Major General Muhammadu Buhari (retd.).

The letter further stated that sometime in March 2021, someone from Buzzfeed called Ezekwesili to inform her that she was listed as a director of Alpha Reach Limited alongside el-Rufai and Omojuwa.

The lawyer said Ezekwesili was surprised when Buzzfeed supplied a CAC document showing that she was indeed a director at the firm.

The letter read in part, “It is our brief that our client promptly contacted you but you informed her that the Alpha Reach Company Limited is your company and that she is not involved in it at all. Our client also requested for the incorporation documents from you and you promised to make the same available to her within a week but you never did.

“That you never informed our client of an intention to seek for her consent or participation in incorporating any company whatsoever and for any purpose whatsoever.”

The lawyer, therefore, gave Omojuwa an ultimatum to immediately apologise and issue a statement or face legal action.

It read, “On account of the foregoing, we have the firm mandate and instruction of our client to demand the following: That you upon receipt of this correspondence cause to be issued a public statement/apology exonerating our client from the incorporation process and activities of the Alpha Reach Limited.

“That you give a detailed account (to our client via correspondence) the circumstances leading to the incorporation of Alpha Reach Limited and attach the Certified True Copies of all the incorporation documents submitted at the Corporate Affairs Commission in the course of registering the said company.

“It is our hope that you accede to the foregoing request forthwith otherwise we shall be left with no choice but to employ all legal avenue (s) to seek redress.”

However, Omojuwa said in a statement that Ezekwesili was never a director at his firm.

The blogger also maintained that his firm played no part in the controversial social media campaign.

“Alpha Reach as an organisation was not involved in the campaign making the rounds.