It was gathered from a witness named Michael Etim that the horrific crash occurred at about 1.30pm. 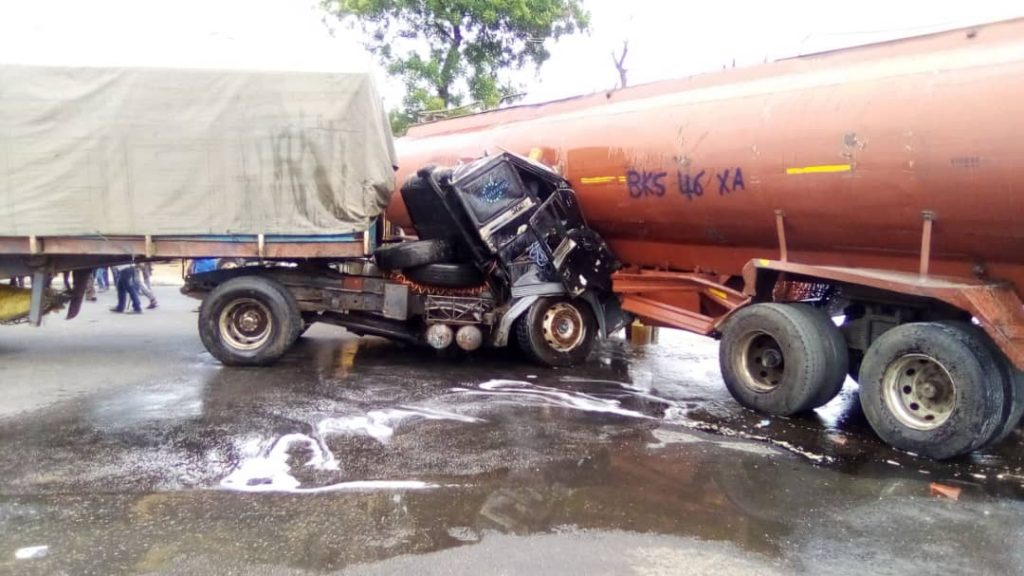 Daily Post reports that a tanker which was loaded with 33, 000 litres of petrol was on Friday has suffered an accident.

The tanker was involved in a head-on collision with a 33 tyres Mack truck loaded with goods along the Harbour Road in Calabar, Cross Rivers State.

DAILY POST gathered from a witness named Michael Etim that the crash occurred at about 1.30pm.

“A truck loaded with goods (33 tyres) was coming into Calabar, while a 33, 000 litres fuel tanker that was fully loaded with fuel was coming out of the Depot

“The fuel tanker was to negotiate out of Calabar and at that point, there was a disconnect between the two drivers, maybe they misunderstood themselves as well as the traffic officer who was giving instruction” he stated.

When DAILY POST contacted the Public Relations Officer of the Nigeria Security And Civil Defence Corps, Eremi Solomon John, he said that though the accident was serious, there was no casualty

He said “The truck fully loaded with goods coming into Calabar could not hold its break because of the load it was carrying and while the tanker carrying the 33, 000 litre of fuel was already in the middle of the road negotiating

“So they ran into themselves and a loud bank ensued. The one that ran into it had it front compressed with the driver (Trailer Driver inside). We thank God for the fire service from EPZ and the Nigeria Port Authority Fire Service trucks that came with the Nigeria Security Civil Defence disaster management team to rescue the situation.

“We had to tow the truck a little backwards so that the impact, one on one with the tanker will be reduced. Fuel started licking from the tanker and was pouring on the whole road and if there was a small fire, the whole of the areas including Police Station, Mopol 11, and other institutions would have been engulfed by fire”

John who corroborated the officers account said, ”the firemen tried, they were pumping water on the tanker to reduce the power of the fuel and also neutralize the one on the ground until they brought another truck to reload the product into it

When we contacted the Sector Commander, Federal Road Safety Corps, Cross River State, Cyprian Offordu confirmed the accident and regretted its occurrence, “My men have gone there to rescue the situation” he said

We Are Suffering, Hungry, We Need Our November Salary – Policemen Cry Out