The police source informed that the suspects, during interrogation, also said they abducted two other staff of the bank and carried out several high-profile kidnap operations in the state. 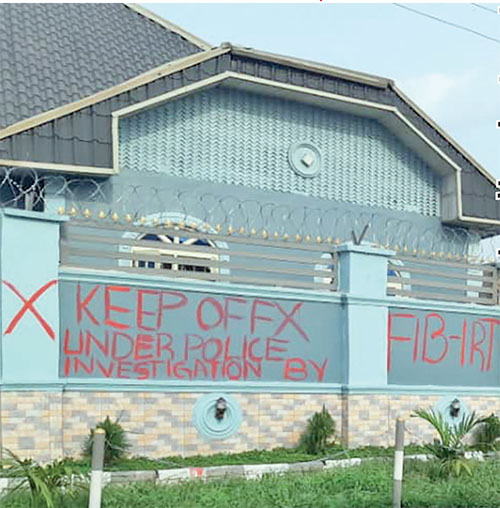 For as many as two long years, the many residents of Agbarho community in Ughelli North area of Delta State had been thanking God for the life of a member of the community who they all saw as a hugely successful businessman.

The man, Victor Dominic Ovo, owns an exotic building in the community. And he was generous enough to donate a part of the building to a pastor, who has been using the space as a fellowship centre.

But there was something the pastor and other members of the community did not know. The well-built bungalow believed to be the residential apartment of this ‘successful businessman’ was nothing but a hideout where several kidnap victims were kept.

Members of the church and indeed, the community got the shock of their lives recently when detectives attached to the Intelligence Response Team (IRT), who had arrested Victor Dominic Ovo at a different location, stormed the compound. Several persons who gathered for their fellowship took to their heels when they saw Dominic in chains. He led the operatives to the main house where different arms and valuables believed to belong to previous victims were found.

A reliable police source informed the reporter that Dominic is a leading member of a notorious kidnap gang whose members have been smartly picking high profile persons in the state. He and three others identified as Owesi Okpaka, Lawrence Kevwe Egagah, Alex Okoun and Usobotie Sylvester were nabbed when of one their victims summoned courage and petitioned the Inspector General of Police.

The victim, identified as Daniel, a staff of Zenith Bank, Urhobo College Branch, Warri said that he was abducted on October 5, 2020 about 8am by heavily armed men who took him to a house at Agbarho community.

The police source informed that the suspects, during interrogation, also said they abducted two other staff of the bank and carried out several high-profile kidnap operations in the state. The abduction of the bank workers was made possible, it was gathered, through the information provided by Owesi Okpaka, who was a staff of the bank as at the time of the operation. They were nabbed with 14 rounds of live G3 ammunitions, AK-47 rifles and several other weapons. They also led the operatives to another house in the neighbourhood used as a hideout, and which belongs to Lawrence Kevwe Egagah.

Recounting his ordeal, Daniel said that he was on his way to work when he was trailed and abducted by heavily armed men.

Said he: “On October 5, 2020 about 8am, I was abducted by a gang of kidnappers. There were four of them in a Mercedes Benz Car; I’m not too sure of the colour of the vehicle. Another car that I had also seen opposite my street followed and blocked me from the rear. I was taken into the Mercedes Benz and we went to a location suspected to be Agbarho community, owing to the duration and number of turns we made before I was dropped. I was kept in a bungalow and made to stay in the passage of the building. The building had four rooms, two toilets, a kitchen and I could hear women fetching water in a well. I was blindfolded, chained in both hands and legs. During the negotiation, they would take me and drive around while I was allowed to talk to my family. I was there for five days and my family paid N15 million before I was released on October 10 2020.”

Why I used church building as hideout for kidnap victims

Dominic, a native of Oghara in Sapelle Local Government Area of Delta State claimed that he was the one who handled the negotiation of ransom.

“I dropped out of university and went into wood business and illegal oil bunkering. I also have a poultry farm by the side so that if anyone queries my source of income, I will show them my farm.

“Once you are into anything illegal, you will naturally meet bad friends. This was how I met the others and we formed a five-man gang. I own exotic cars, which we normally used for our kidnap operations.

“The Zenith Bank staff kidnap was arranged by Okpaka who was a staff of the bank. The first person paid us N15million in dollars as ordered by us. The second and third victim also paid the same sum. Okpaka chose the rich ones among them and just as he predicted, they paid good money and my total share from the three victims was about 5million.”

Dominic said his house was used to camp the victims because of the location. “I am seen as a big boy in my area and my house is massive. I gave out the front part to a pastor who knows nothing about my illegal business. People respect me because of that, this is why it is very easy to keep victims there even while people come to the compound to fellowship.

“There was a time the police tracked a number to my area. They did not enter my compound because people were there praising God. This is the reason why whenever we are calling for negotiation with victim’s number, we will move the person to another location before he or she will be allowed to talk to their family.

Apart from kidnapping, I have participated in high profile organised robberies in Ondo state. I did that only three times in 2020.”

Greed drove me into crime

A native of Ubogo Community in Udu Local Government Area of Delta State, Okpaka told the police that he was the one who suggested that the three staff of Zenith bank should be abducted.  “I am not legally married but I have a woman –  Loveth Owhayovwe – who gave birth to a child for me.  I studied Business Administration at Oghara Polytechnic and graduated in 2017, while I was in Oghara Polytechnic, I was working in Zenith Bank as a driver.

“I was the person responsible for the three kidnapping incidents that involved Zenith Bank staff. The first person that we kidnapped was one Daniel. I was the person that monitored him and gave my gang members the location of where he is staying and the type of car that he usually drives. The said Mr Daniel is the Zenith Bank Manager of Urhobo College in Warri and we kidnapped him sometime in the month of October 2020.

“My role was just to provide every needed information about him. I monitored things in office while he was away till the point where I was told by my colleagues in the bank that ransom had been paid. I got N2.5million as my share.

“I could not believe that I made my two years’ salary in one day. So I decided to give them another one. The second was that of Mrs Zowa, the woman is very rich. I monitored her by getting closer and running errands for her.

“I told them exactly when she would get to the spot where she was kidnapped. Just like I predicted, she did not spend up to a week and her family paid. I also got N2.5million as my share.

“I was carried away by greed and decided to give them another one. She is known as Mrs Isioma and is a manager of one of Zenith Bank branches in Delta. I choose her because she is rich but stingy. I got N3.5million as my share. I resigned from the Zenith Bank job in January, 2021 because the money that I collected was enough for me to start up a good business.”

Okpaka said while the three victims were still in their custody, he made sure that no one suspected him. “I was always showing my concern when the news of their kidnap broke. I had money but I would pretend that I am broke so that no one would suspect me. I was not their personal driver but as a bank driver, I know everything about most of the managers of the areas that I cover. They normally send me on personal errands.

“All these happened in October and I waited till January before I resigned. I was shocked when police arrested me through one of the gang members who mentioned my name. I am sorry and beg for mercy.”

Another suspect, Egagah, also from Delta state claimed that he went into crime when he was deported from Dubai. “I got a job in Dubai where I worked in a cargo company as an accountant. Unfortunately, something went wrong and I was deported.

“I have known Okpaka for more than ten years and he used to work in Zenith Bank as a driver. He was the one who came up with the idea to kidnap his former boss. He was still a staff of the bank when he brought the job. He assured us that the man is so rich that he will be able to give us N10million. I called the others and they brought their cars and arms for the operation. The meeting took place in my house. Luckily the man paid more than N10million and my share was N2.5million.

“On the day of my arrest, I was at home when policemen invaded my home and when I tried to run away, they shot me on the leg. It was at the hospital that I got to know the reason for my arrest. I thought they came after us because of fraud which is another business that I do by the side.”

Another suspect, Usobotie, who is also from Delta claimed that he got all the arms from one Emmanuel, claiming that the man was dead.

“I was not part of the gang that kidnapped those bankers. I only helped them to get most of the weapons they used for that operation. I got it from Emmanuel my friend who was a political thug. He was gunned down during one robbery operation at Ughelli and since I knew where he normally hides his arms, I took it and sold it to Egagah. They only gave me N80, 000 and returned it after use.”