Nigerian footballer, Odion Ighalo has said he was not treated fairly by Utd boss, Solskjaer. 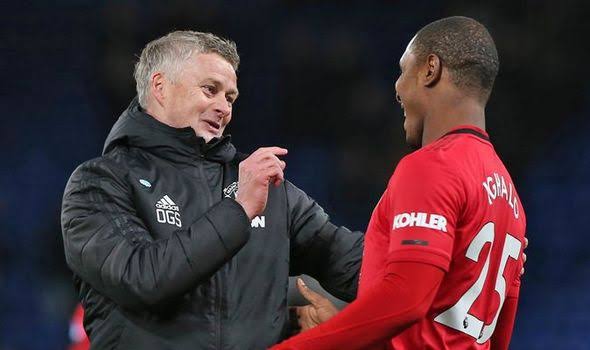 Solskjaer and Ighalo
Nigerian striker, Odion Ighalo has accused Machester United coach, Ole Gunnar Solskjaer of not treating him fairly.
He said the coach was “unfair” to him during his time at Manchester United.
Ighalo joined the Red Devils in January 2020 on a six-month loan deal from Chinese Super League side Shanghai Shenhua.
He impressed initially, scoring five goals in as many starts, a form that saw his loan extended until January 2021.
But the 31-year-old started just two games this season before departing.
And while Ighalo continues to “love” the Red Devils, he admits he had to leave after he was regularly snubbed by Solskjaer.
“There wasn’t much possibility because I wanted more playing time,” Ighalo told Sky Sports when asked if he could have extended his stay with United.
“At my age, I want to play and not just sit on the bench and not have any minutes.
“I didn’t just want to be there picking up a salary – I wanted to be involved so I said to my agent that if an offer comes in, I will look at it and see what’s best for me, which is what I did.
“After my initial loan was extended, I did not play much which was perhaps a bit unfair but as I said, I am always grateful for the opportunity.”
Top Stories

Busted! Foreigner Who Sold Over 4,500 Rifles To Bandits In Zamfara Gets Nabbed By Police, Miyetti Allah