Darius, the rabbit went missing from its owner’s home in Stoulton, Worcestershire, on Saturday night, April 10. 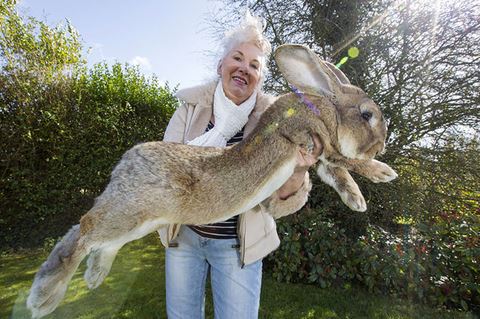 The world largest rabbit has been stolen from the home of its owner.

Darius the rabbit, a Continental Giant rabbit who holds the Guinness world record for being the biggest rabbit in the world at 4 feet and 3 inches long (129 centimeters), went missing from its owner’s home in Stoulton, Worcestershire, on Saturday night, April 10.

Annette Edwards, the owner of the giant rabbit, said she discovered Darius was missing on Sunday morning, April 11, and contacted the police, who have issued an urgent appeal for the return of the prize-winning bunny.

She has also offered a £1,000 reward for its return and took to Twitter to plead to those who took Darius to "please bring him back."

“A very sad day. Guinness world record Darius has been stolen from his home. The police are doing there [sic] best to find out who has taken him. There is a reward of a £1,000. Darius is to [sic] old to breed now. So please bring him back,” Ms. Edwards, who is a former Playboy model, wrote.

“It is believed the Continental Giant rabbit was stolen from its enclosure in the garden of the property of its owners overnight on Saturday (10 April - 11 April),” the West Mercia Police in western England said in a statement.

“The rabbit is quite unique in the fact it is 4ft in size and has been awarded a Guinness Record for being the biggest rabbit in the world.”

Darius has held the record for being the largest rabbit in the world for over 11 years after the Guinness Book of World Records gave him his title of April 6, 2010.

“The longest rabbit is Darius, a Flemish giant rabbit owned by Annette Edwards (UK), who was found to be 4 ft 3 in (129 cm) long when measured for an article in the UK's Daily Mail newspaper on 6 April 2010.,” says the Guinness world record entry.