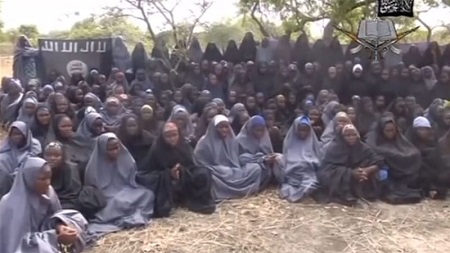 Chibok girls
A community leader has opened up that some of the 276 Chibok schoolgirls abducted by Boko Haram terrorists were kept in houses and taught how to recite the scriptures.
The revelation is coming seven years since the girls Government Girls Secondary School in Chibok, Borno State were abducted by terrorists.
The National Coordinator of Gwoza Christain Community Association (GCCA), Ayuba Bassa said the memory of the abduction remains fresh in the memory of many Gwoza residents, who watched helplessly as the insurgents moved the girls from one location to another.
He spoke on Thursday during an interview on Channels Television breakfast programme, Sunrise Daily, and lamented that many are disappointed over unfulfilled promises that the girls will be rescued soon.
“I could picture when the abduction earlier happened. Most of the people within the Gwoza settlement then will tell you the houses where the girls were divided into and kept. Those Chibok girls were in Gwoza for more than four weeks and were being taught how to recite the scriptures.
“So, if you go to Gwoza the memory is still fresh. They will tell you it is this house and this house that they were being kept. I can point like two houses they were kept and the routes they passed.
“So many residents feel if the government had made enough efforts to know that the girls were kept in house number one and house number two, the girls would have been rescued,” he said.
Bassa believes that the Chibok abduction was used to frustrate Goodluck Jonathan-led administration.
“Even if you go to Gwoza today, ask anybody, they will tell you, the girls were used for political rivalry,” he added.
The abduction of Chibok schoolgirls on April 14, 2014, threw the world into a shock, and many human rights groups, and campaigners have continued to call for their return.
Although most of the 276 girls escaped or were later released, more than 112 girls are still missing.
The #BringBackOurGirls campaign group has since vowed not to relent in their campaign for the release of the schoolgirls.
Top Stories