A young kidnapper has confessed after being arrested by security operatives in Osun state. 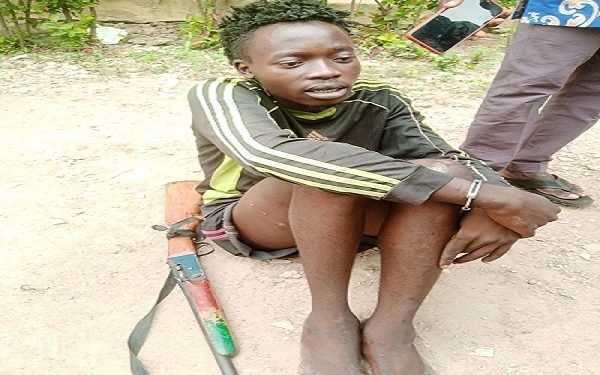 The kidnapper after he was caught
Security operatives in Osun state have arrested a 20-year-old suspected kidnapper identified as Ahmad Muhammad.
According to him, he lives near the expressway in order to make it easy to kidnap travellers in Osun state.
It was gathered that Muhammad was arrested on Ife/Ibadan Expressway at Wasinmi, a village in the state.
During his parade at police headquarters in Osogbo, the state capital, he said he was one of the seven gang members who kidnapped passengers on the expressway.
The suspect, who hails from Tambuwal community in Sokoto State, added that he was arrested in a shootout with police.
He said “we kidnapped two people along Ibadan/Gbongan Expressway after we made a roadblock. The police were alerted and they faced my gang in a gun battle during which my other gang members ran away with the kidnapped victims. It is painful that my other gang members left me alone in that bush and ran away,” he said.
“It was easy for the police to arrest me because I don’t know the routes in that bush and I could not trace my steps to the place where my other gang members escaped to.”
According to him, other members of the kidnapping gang are Alhaji, Buba, Siraju, Sadiq, Saidu.
“My gang members are all Fulani and they are not new in the business, it is a means of survival. I don’t have a shelter, I live along the expressway. I live on the road to make operation easy. I live along Ibadan, Kaduna, Abuja expressways to block roads and kidnap passengers for ransom.”
Top Stories