A hilarious video has surfaced showing Nigeria's star of the moment, Kelechi Iheanacho goofing after his goal sent his club to the FA cup final. 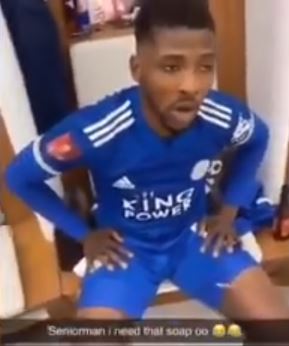 Kelechi Iheanacho
Following his feat yesterday that sent his club to the FA Cup final, Kelechi Iheanacho has been seen exchanging banters with fellow Nigerian Wilfred Ndidi  in the dressing room.
On Sunday April 18, Iheanacho netted Leicester's only goal in their FA Cup semi-final clash with Southampton to send his club to the final tournament clash against Chelsea.
During the celebration in the dressing room after the match, Ndidi filmed himself making a funny request from his compatriot.  He asked Iheanacho to cut soap for him which  means "reveal the secret of your success" in the Nigerian context.
Watch the video below.: