Gunmen who attacked a police station in Abia state came with dynamites and rocket launchers. 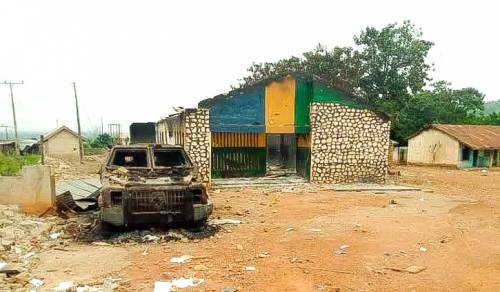 Abia police attacked by gunmen
The gunmen who destroyed the Uzuakoli Police Station in the Bende Local Government Area of the state attacked the place with dynamites and rocket launchers, the Abia State Police command has said.
In a statement, the command's spokesman, Godfrey Ogbonna, said the attack happened around 3 am on Monday.
“They used dynamite and rocket launcher to burn down the building, including private and official vehicles, tricycles and motorcycles parked on the premises,” he said.
According to him, policemen at the Izuakoli station repelled the assailants and stopped them from gaining access to the armoury.
“No life was lost in the Monday attack," he said.
SaharaReporters had earlier reported how heavily armed gunmen in the early hours of Monday attacked the station, setting it on fire.
Due to the incessant attacks on security agencies and their facilities, the state government imposed a curfew on four volatile towns Aba, Umuahia, Ohafia and Arochukwu.
It was gathered that the gunmen still continued the onslaughts on police stations by sacking the Uzuakoli Police Station.
The state government had last week alerted residents of a planned attack in parts of the state by militants and urged all to be vigilant.
SaharaReporters gathered that most policemen in the state now choose to appear in mufti except when they are in the stations.
It was learnt that the option to use mufti in public was also ratified by the police authorities as a means of reducing the heavy human casualties in the South-East police force.
Top Stories