An oxygen leak in India has left a devastating outcome resulting in the death of 22 person. 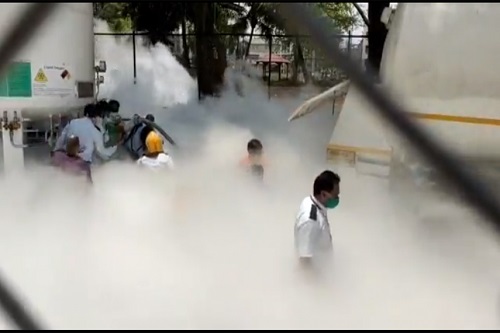 Oxygen leak in India kills 22 persons in India
22 Covid patients have lost their lives due to oxygen leak at a hospital in India.
It was gathered that the patients lost oxygen for around 30 minutes.
The incident occurred on Wednesday, April 21, while an oxygen tanker was refilling a storage tank at the Zakir Hussain hospital in Nashik city.
According to Nashik district collector Suraj Mandhare, the supply was interrupted after a leakage in one of the storage tankers at Dr. Zakir Hussain Municipal Hospital.
All the victims were on ventilators and in need of constant oxygen supply before the incident occurred.
Video from the scene showed gas leaking from the tanker outside the hospital with white fumes covering the area rapidly.
A total of 157 patients were undergoing treatment at the Covid-19 hospital in Nashik, Maharashtra health minister Rajesh Tope said. “Of these 157 patients, 61 were critical with some of them on ventilator and oxygen support.
Among the 22 who lost their lives, 11 are men and 11 women.”
The Health Minister also promised that the government will look into the matter and conduct a thorough probe.
"As per the information available with us, patients who were on ventilators at the hospital in Nashik have died. The leakage was spotted at the oxygen tank which was supplying oxygen to these patients. The interrupted supply could be linked to the deaths of the patients in the hospital," Mr. Tope said.
"We will issue a statement later after the investigation is over," he added.
Zakir Hussain Hospital is a Covid-dedicated facility. Around 150 patients were either oxygen-dependent or on ventilators.