Sharing receipts, Sandra revealed she was shocked after she found out that Ubi allegedly used her credit card to shop without her knowledge. 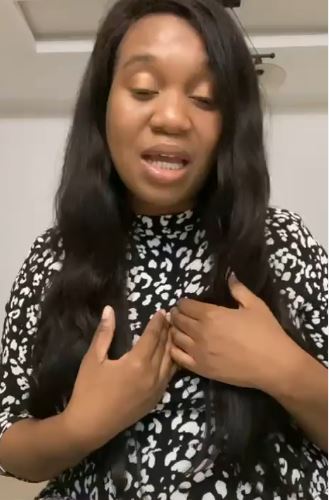 Sandra Iheuwa, the 4th babymama of music exec, Ubi Franklin has alleged that he cloned her credit card and even upgraded his phone after she sponsored his Dubai trip in December 2020.

Following Ubi Franklin’s outburst yesterday, Sandra took to social media to speak her “truth” as she revealed what transpired between her and her baby daddy.

In a 14 minutes video posted on her Instagram page, Sandra disclosed that she was the one who sponsored Ubi’s trip to Dubai last year December, after he asked to tag alone with her and her children for the trip.

Sandra revealed that she spent $4000 for flight ticket for Ubi and his other children to tag along in order for the kids to met for the first time. However, the family trip did not happen due to passport issues and other circumstances beyond her control.

However, only Ubi, Sandra and her three children made it to the Christmas vacation. During their Dubai trip, Sandra said she introduced Ubi to her boyfriend who was in Dubai at that time.

She also narrated how she and her boyfriend took Ubi on a shopping spree and upgraded his economy ticket to business class after he begged for the upgrade.

According to Sandra , she was generous to Ubi because of their daughter and also because she’s a “boss” who can afford it.

Sharing receipts, Sandra revealed she was shocked after she found out that Ubi allegedly used her credit card to shop without her knowledge.

She also accused the blogger of being a dead beat dad, while disclosing that Ubi have never contributed in raising their daughter.

The entrepreneur also shared Bank receipt of the money she transferred to Ubi’s South African baby mama while accusing Ubi of failing to take care of his children.

Sandra also apologized to Ubi alleged girlfriend Renee, who she prayed to be barren.