Keyamo earlier accused Eedris Abdulkareem of dissing him in his new song, Jaga Jaga Reloaded, because he refused to help him with money back in 2018. 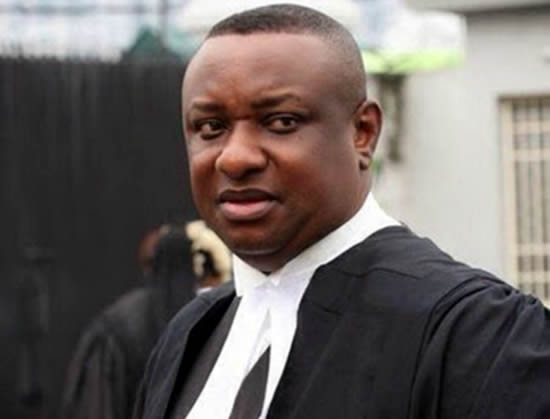 Some really angry Nigerians have taken to Twitter to call for the suspension of the account of the Minister of State for Labour and Employment, Festus Keyamo, over his tweets showing the screenshots of his chat with singer, Eedris Abdulkareem.

Keyamo earlier accused Eedris Abdulkareem of dissing him in his new song, Jaga Jaga Reloaded, because he refused to help him with money back in 2018.

According to him, Abdulkareem resorted to blackmail after his attempt to extort money to support the Buhari administration failed.

Keyamo, in a series of tweets, backed his claims with screenshots of the chat between himself and the rapper.

He said, “In 2018, when I was named the Director of Strategic Communications for Buhari Campaign Organisation, Eedris waxed a song in support of Buhari and wanted to join us, albeit for a fee. He then made desperate efforts to see me through text messages from his phone no.

“I explained that my job was voluntary. It was the same thing I told so many other so-called activists-by-day-and-hustlers-at-night who secretly approached me. He then switched to the fact that he wanted a loan to pay for his hotel bills to the tune of N1.3m and to cater for his ‘sick mum’.

“That was already running into more than N3m. However, one govt functionary called me to say he told him another story that his child was sick.”

Keyamo further shared the receipts of the chat he had with Eedris Abdulkareem and posted his mobile number as well.

The post showing the screenshots of the chat and mobile number have since been deleted by Twitter. However, Nigerians want more and are calling for the suspension of Keyamo’s account.

Another tweep, @ose_anenih, said, “Reported his account and his tweets. You can’t be posting people’s private information online. That’s a platform violation at the very least.

“Anyone who knows Eedris should contact him. He might be able to get some coins if he pursues this in court sef.” (sic)

Also, @jimmy2time said, “This @fkeyamo who doesn’t know fvck all about privacy and personal data protection/confidentiality is a lawyer and a SAN.”

Other users who supported the suspension of Keyamo’s account also tweeted in replies and retweeted suspension tweets.

According to @gimbakakanda, Keyamo should have only stuck to revealing the singer’s bids for campaign and not his requests for personal favour.

He said, “Keyamo should have just stuck to revealing the musician’s desperate and humiliating bids to campaign for the re-election of a President he wants Nigerians to consider an utter failure, and not the man’s requests for personal favour. That, in my opinion, is unnecessary and low.”

In her view, @worldofdabby, said, “Going public with a private chat is the same as publishing someone’s nude. Is it right? Who doesn’t have a private shame?

“Hunger pushes people to the wall. I rather suffer the pain of betrayal than showing the nakedness of a full-fledged human being publicly. God is watching us!”