Rev. Fr Ejike Mbaka has cried out that Imo state governor, no longer picks his call since he assumed office. 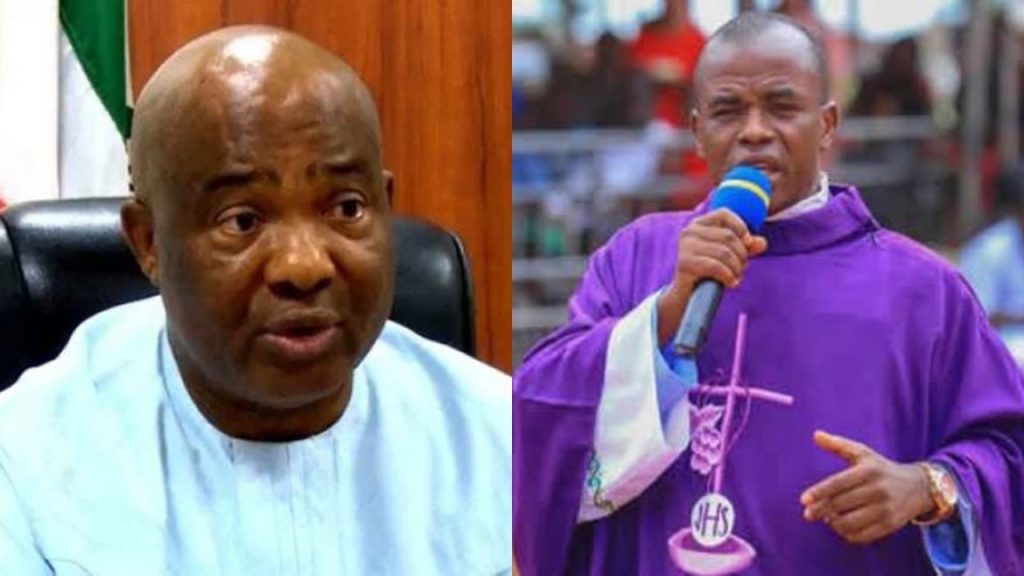 Hope Uzodinma and Rev. Father Mbaka
Catholic Priest and Spiritual Director of Adoration Ministry, Enugu, Rev. Fr Ejike Mbaka has revealed that Hope Uzodinma, the governor of Imo state no longer picks his call, according to a report by DailyPost.
Recall that the two had had a sweet relationship since his prophecy about him becoming governor against all odds came true.
In his 2020 New Year message, the cleric had said Uzodimma of the All Progressives Congress (APC), a former Senator, would be sworn in as governor.
“In spite of all that would happen this 2020, there is hope. In Imo State, there is hope. Hope, hope, hope … hope in Imo State!
“Imo people have suffered (but) God is raising a new hope that would be an agent of salvation for them”, he said.
Emeka Ihedioha of the People’s Democratic Party (PDP) was the incumbent when Mbaka gave the prediction. Imo elders in the party dismissed the prophesy.
Weeks after, the Supreme Court, in an unanimous decision, ordered the Independent National Electoral Commission (INEC) to issue Uzodinma a certificate of return (CoR).
Justice Kudirat Kekere-Ekun, who read the judgement, stated that the candidate of the APC won on grounds that he polled majority of the lawful votes cast at the election.
Now, Mbaka has disclosed that since Uzodinma assumed power, he has not answered his phone calls.
The clergyman also told the people that the governor was also yet return to the church to show appreciation.
“It’s not that I’m asking for money, it’s that I should advise him for good governance”, Mbaka said.
Father Mbaka predicted President Muhammadu Buhari’s victory against former President Goodluck Jonathan during his 2015 New Year message.
Top Stories