Students of Federal University of Agriculture, Makurdi, Benue State abducted by terrorists have been released. 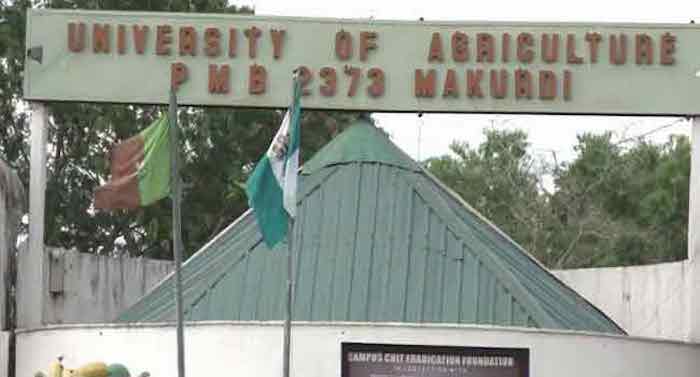 Federal University of Agriculture, Makurdi, Benue State, North-central Nigeria
The release of two abducted students of the Federal University of Agriculture, Makurdi, Benue State have confirmed.
They were released in the early hours of Wednesday, April 28, 72 hours after they were taken away by suspected terrorists from the university campus.
Recall that the students were abducted Sunday evening during a private reading session at about 10:30 p.m. WAT.
Prof Richard Kimbir, the Vice-Chancellor of the university confirmed the release of the students Wednesday morning during a meeting with the university management and students’ union leaders.
Details of the release of the abducted students were not immediately clear, but it was gathered that they found their way into the university premises and have been handed over to security. It was not clear whether payment of ransom was involved.
The two students were identified as Israel Kwaghnger, a final year student College of Agriculture and Science Education (CASE) and Salifu Solomon Odoma, a 400 level student at the Department of Electrical Electronics.
Meanwhile, a press statement signed by Obida Emmanuel, media aide to the students’ union president of the university obtained by HumAngle indicates that one of the students, Solomon, travelled to meet his parents Ankpa local government of Kogi State earlier this morning.
The document indicated that only Israel, who hails from Tarka Local Government of Benue State was received.
It stated that no ransom was paid by the school or the Federal Government, noting, however, that there was communication between the hoodlums and the parents of the victims, “which we don’t know the outcome as Mr Israel’s family claim they did not pay anything.”
“But we’re still yet to hear from Mr Solomon at the point of this release.”
According to the press release, the students said “the kidnappers just came to them and brought them close to the school before setting them free.”
Top Stories