A touching video of Indonesian crew members singing weeks before their submarine sank has surfaced. 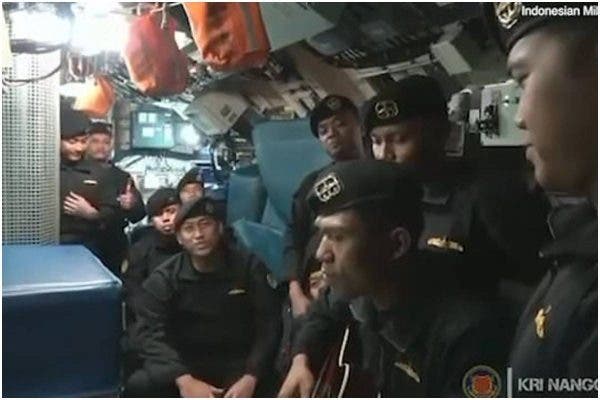 Indonesia submarine crew members singing before their submarine sank
A video has surfaced showing crew members of an Indonesian submarine singing weeks before they all died after their submarine sank
The submarine sank to the floor of the Bali killing all the 53 crew members on board.
The Indonesian military released the video last month, but it caught the attention of many on social media in the last few days. It shows tightly crowded crew members in uniform as one strums a guitar. Together they sing an Indonesian song called “Sampai Jumpa,” which means “see you later.”
“Even though I’m not ready to be missing you, I’m not ready to live without you, I wish all the best for you,” they sing in unison.
The short video was recorded weeks before the disaster as part of a submarine commander’s farewell, according to the Indonesian military.
Just weeks after the scenes of camaraderie were filmed, the KRI Nanggala-402 sank to the seabed, killing everyone board.
Four days after the submarine was declared missing – military chief Marshal Hadi Tjahjanto confirmed the Nanggala had sunk and all of it crew had died. He said:
‘With deep sadness, I can say that all 53 personnel onboard have passed. ‘We received underwater pictures that are confirmed as the parts of the submarine, including its rear vertical rudder, anchors, outer pressure body, embossed dive rudder and other ship parts. ‘With this authentic evidence, we can declare that KRI Nanggala 402 has sunk and all the crew members are dead.’

Unfortunately, all 53 crew members on board died. pic.twitter.com/0WGvXgtGpg